By Debbie Friedman
Devotional music and ballads from the popular Jewish singer/songwriter.

Jewish folksinger Debbie Friedman is very popular among the Baby Boomer generation. Since her first release in 1972, she has amassed a discography of more than 20 albums of songs which have sold over 200,000 copies. Her music and ballads have been used at Reform services, at Hebrew schools, camps, and many other venues. Friedman has set a new standard for Jewish music and the devotional life. One People is a CD about "the wish to acknowledge that what we share in common is greater than what differentiates us." This spirit of unity extends to other religions and also affirms the Jewish value of tikkun olam (mending the world).

The title song "One People" expresses the hope that one day soon, peace and not war will be what unites a nation. Of course, that dream which has been espoused by so many patriots still seems far off in the distance. Meanwhile, religious people "Gather Round" in various communities and try to weave together strands of meaning. Rituals in Judaism and on other spiritual paths draw people together as in "First to Rejoice" and "Sow in Tears, Reap in Joy." Two devotional pieces illustrate Friedman's talent for songs mixing English and Hebrew choruses: "For All That Is Good" and "Hear Our Voices." 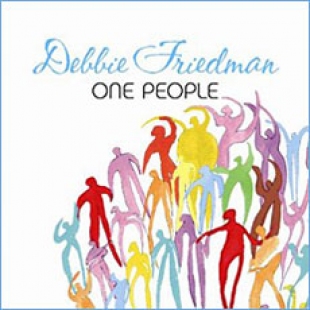