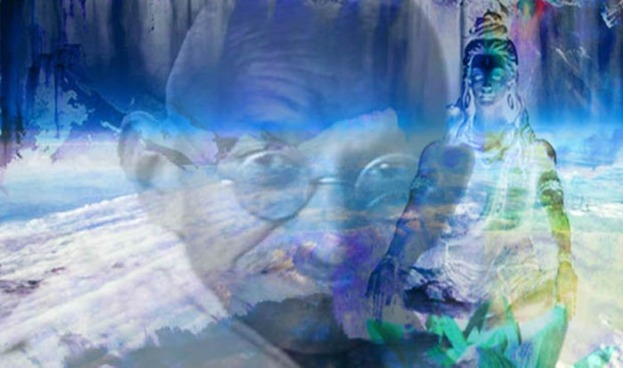 The Ecology of Our Minds

When I was eight years old, my parents used to take me to the National Mall in Washington, D.C. We would go every week of the summer, spread out a blanket on the grass, and enact a tradition central to our monotheistic branch of Hinduism: singing devotional songs to passersby, often accompanied by a harmonium and brass hand symbols.

This type of singing is called kirtan and is meant to praise God. While they sang I would spend hours playing in the dirt and sand, making little houses out of twigs under the shade of trees. Even though I was focused on my work, I now realize that I unconsciously connected my time with the earth to my parents’ religious singing. These are my earliest memories of being in contact with Earth, and they were tied with my faith.

My connection to that child has grown more distant over the years. Like many people my age I live in front of books and computer screens. However, my religion has instilled in me important values regarding the earth. With the impact of our product-hungry lifestyle on the environment becoming ever more apparent, I’ve realized the value of my faith’s teachings. They teach something which is, in my opinion, beyond the “Earth dies, we die” mentality, which although correct, doesn’t capture the subtler shades of our connection with the earth.

Instead, my faith envisions Earth as a person, a mother. This mentality has formed the basis of my view towards the earth. One doesn’t treat a person as an exploitable source of resources, just as one doesn’t wish death upon one’s mother.

My faith teaches that our relationship with Earth has two aspects. The first is to tread lightly. The “Sri Isopanisad,” an essential part of my religion’s scriptural canon, describes humanity’s relationship to Earth as one of only taking what is necessary. The sentiment behind this is to reduce our needs and be happy with less, both for the well-being of the planet and our own spiritual enrichment. This idea has impacted my attitude towards products and things, perhaps subconsciously. Though a few toys did catch my eye once in a while, an insatiable hunger for things was never a thread in my early life.

I remember seeing friends’ closets brimming with toys and feeling little except for a small pang of jealousy. I still feel that way and the reason has to do with the values my parents instilled in me—echoes of philosophical truths expressed thousands of years ago by those perhaps disgusted by the materialism of their own age.

A more quantifiable means by which my faith regulates my interactions with the earth is through vegetarianism. Prevention of animal cruelty and abstinence from meat are rooted in the Hindu and Buddhist ideas of ahimsa, or strict nonviolence. The devastating impact of factory farming techniques on the environment is becoming more apparent, with the FAO holding livestock responsible for 14.5% of greenhouse gas emissions generated by human activity. I’ve been a vegetarian all of my life and I’ve realized how important this message of ahimsa is for the world’s well-being. We have a greater ability to manipulate nature than ever before, and this immense power can be (and is) disastrous if misused. Treading lightly means showing respect both for Earth and for her inhabitants.

My parents used to tell me ancient scriptural stories and, when I grew older, I read them myself. Many of them were about kings and emperors, and a common theme in these stories was the earth. In short, the personal virtue of these rulers was reflected in the bounteousness of their land. When kings ruled justly and wisely, Earth provided in abundance.

In one famous story, five kings were able to turn a barren desert town into a prosperous city by giving charitably and acting virtuously. This idea runs parallel to the conception of Earth as a person. Earth, as a person, can recognize and reward good character.

How does this apply to my life? I don’t believe that simply being a good person will bring back rainforests although Radhanath Swami, a spiritual leader in my religion, has said, “The ecology of our hearts reflects the ecology of our world.”

By becoming more spiritual and introspective as a society, I believe we can tackle the root of issues like global warming. These stories of kings and kingdoms hold a potent message. To change the world for the better we must start with ourselves.

My religion’s view of Earth as a person has changed my own perception of the planet. I believe that the environmental issues jeopardizing our planet today indicate a spiritual lacking, a hole we’re trying to fill with more and more consumption. By lessening our needs, we can start battling environmental issues.

As Gandhi once said, “Earth provides enough to satisfy every man’s need but not every man’s greed.”

When Nimai wrote this article, he was in the 10th grade. Nimai lives in Maryland and has been practicing Vaishnavism, a monotheistic tradition within Hinduism, since his childhood.