Posted by Frederic and Mary Ann Brussat on May 7, 2013 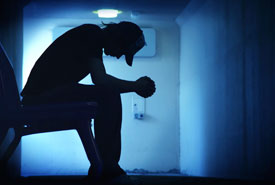 More Americans now die of suicide than in car accidents and from 1999 to 2010 the suicide rate among those ages 35 to 64 rose by nearly 30 percent. The most pronounced increases were seen among men in their 50s, a group in which suicide rated jumped by nearly 50%. According to an article in The New York Times, explanations for this increase are financial stress and the availability of drugs which can be deadly in large doses. Many of the suicides are members of the Baby Boom generation who have been disappointed with how their lives have turned out given all the high expectations for them. Many have additional stress because they are caring for aging parents and still providing support to adult children.

Most Gracious God, be with the friends and family of ____________ in their shock and grief over the sudden loss of their loved one.
We pray to you, O God.

Sustain them with your limitless love when feelings of self-doubt, guilt, anger, or blame threaten to overcome them.
We pray to you, O God.

Hold them close to your heart in their dark night of endless questions and endless tears.
We pray to you, O God.

Remove from them all feelings of shame, for they and ____________ are all beloved children, created in your glorious image.
Hear our prayer, O God.

Help them to forgive themselves as they remember the last days and moments of ____________'s life, that they may be healed of the wounds inflicted to their own body, mind, spirit.
Hear our prayer, O God.

Guide them in the midst of their confusion and bewilderment as they seek to come to terms with the choice ____________ made.
Hear our prayer, O God.

Surround them today and always with the love of their family, friends, and communities in the aftermath of this tragic death.
Hear our prayer, O God.

Next Post: Prayer for Mexicans Who Have Died in the American Desert