A Prayer of Thanks for the Music of the Legendary Beatles

Posted by Frederic Brussat on February 13, 2014 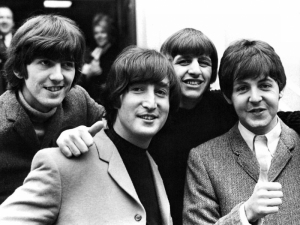 Lord of the Dance, we are so grateful for the enduring melodic rock and pop music by the legendary Beatles.

Poll: In a recent poll, 69% say the Beatles' music has held up well and still sounds current and fresh today; just 25% disagree and think it's out of date. Two-thirds of Americans say the Beatles have had a great deal of influence on music and popular culture. Those surveyed named "Hey Jude" as their favorite song, followed by "Yellow Submarine." (CBS News Poll on Twitter)


Joy of Our Desiring, let us continue to savor, enjoy, and find great pleasure in the delightful music of the Beatles.

Next Post: A Prayer for Those Returning Home from Prison