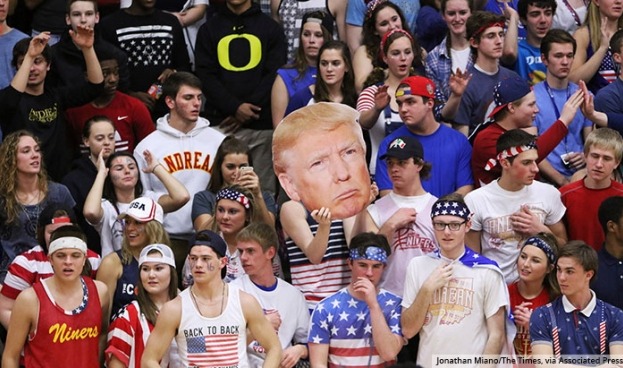 Posted by Frederic and Mary Ann Brussat on March 7, 2016

"With media complicity, Trump has unleashed the beast that has long resided not far from the American hearth, from those who started a Civil War to preserve the right to enslave a fellow human to the Know-Nothing mobs who burned Irish-Catholic churches out of fear of immigrants." This observation is from Timothy Egan's excellent article "The Beast Is Us" in The New York Times. The presumptive Republican presidential nominee stands for "hatred of immigrants, racial superiority, a sneering disregard of the basic civility that binds a society" and his supporters love him for "telling it like it is."

Those who are backing Trump are as angry as he is and that is why they cheer him on when he advocates torture of supposed enemies of America, when he quotes the Fascist Benito Mussolini, or when he attacks free speech by suggesting he'd like to expand the use of libel laws. No wonder the German magazine Der Spiegel has called him "the world's most dangerous man."

It would be very easy for us to condemn Trump and his followers for their outrageous positions that go against longstanding American policies and values. But instead of dismissing these far-Right activists, we can use this fear and tension drenched moment to affirm and reflect upon the importance of the spiritual practice of shadow. Anthony Stevens has written:

"At this very moment in the history of humankind, evolution has put us on the spot. There is an urgent biological imperative to make the shadow conscious. The moral burden of this immense task is greater than any previous generation could have even conceived: the destiny of the planet and our entire solar system. Only by coming to terms with our nature — and the nature of the Shadow — can we hope to avert total catastrophe."

Trump and his supporters have helped us to see the cumulative fallout of events in American history we'd like to keep hidden from examination: the genocide of Native Americans, the witch hunts, the slave trade, economic imperialism, global militarism, McCarthyism, and rampant environmental destruction. These shadowy behaviors have been saluted and efficiently carried out by our leaders in the name of patriotism, idealism, and progress. And these goals reveal the dark capacities of our own human nature. As citizens of the 21st century, we must now take personal responsibility for the dire consequences of our unacknowledged and unbridled darker side.

In an article on TheGuardian.com, Eve Ensler suggests that we "Let Donald Trump Be Our Unifier," forcing all Americans to question who we are. "This is our reckoning, our karma come to roost. . . . What kind of country do we want this to be? What values and principles do we hold and cherish?"

Trump and company have given us a sacred teaching moment: they have made it possible for us to witness the denied parts of our selfishness, bigotry, greed, and entitlement as we ponder the possible perilous impact of our national shadow. We bless the wisdom of writer Henry Miller who wrote: "The full and joyful acceptance of the worst in oneself may be the only sure way of transforming it."

To accept the mystery and paradox of shadow is to unleash a love and respect for others. In many spiritual traditions, shadow work leads to heart work. We accept the imperfection of ourselves and others as we experience a fuller and richer sense of our common humanity.