The Re-Enchantment of Everyday Life

By Thomas Moore
Quiet listening as an active, expressive practice.

"Silent listening is a particular way of being active, not passive, in the world. Over the years, I've spent hundreds of hours as a therapist listening to people's stories, emotions, and struggles, and for the most part I sat quietly. But I listened with great attention and intense focus, so that this quiet listening was perhaps the most active thing I've done in my life.

"In silence we can hear subtle sounds that are usually drowned out by the cacophony generated by a technological culture. Find a quiet room in the middle of a city, and you begin to hear clocks tick or notice your own sighs as your emotions manifest themselves. A city park is as important for the quiet it offers as for its colorful flowers and open fields. Churches are temples to silence, wrapping themselves around a relatively few cubic feet of quiet. I can never get used to people talking in churches, or applauding during rituals. To me, the very point of a church and a liturgy is to invoke fruitful silence, and to disturb that special quiet is to fracture the ritual.

"Noise is not expressive, as music and natural sounds are. We hear the bark of a dog, and nature is present to us. The howl of a wolf or coyote somewhere near the horizon contributes to the enchantment of a quiet night. Raindrops on a roof or windowsill also put us in touch with nature and may lure us into reverie or reflection. But walk past a delivery truck just as the door is slammed shut, or pass a work crew breaking up concrete, or walk in front of a car when its dissonant horn blows intrusively, and you know the jarring effect of noise.

"The priests of the Old Testament who performed divinitory readings of the rustling of oak leaves must have educated themselves in quiet. Silence is a requisite for personal divination, for living with a sense of direction. How are we to know where to go in life if we don't hear the daimonic voices saying, 'No, not that way. Go here.' These voices speak softly, as gently as the rustle of a leaf, and generally they don't repeat themselves.

"If the world is enchanted, by definition it must have a voice, because a chant is made by a voice, and so for enchanted living we need to hear voices. Modern rationality blanches at the idea of taking 'voices' seriously, and we diagnose people who hear voices as emotionally disturbed or mentally ill. I've worked with several people who have heard voices and other sounds, but the truth is, I have too. Once in a while I will be lying in bed and suddenly hear my name called out sharply. I may wake up and wonder who is there. Occasionally in waking life I'll hear a voice or a sound, and I won't be able to tell whether the sound was physical or psychological.

"I need silence to hear the intuitions that pass by, like angels on their vaporous footpath, making soft, barely perceptible sounds. Rarely does a new idea come along orchestrated for trumpets. The vibraphone is a good instrument for the soul, or panpipes, or the Celtic harp. The most important sounds in a person's life may be so quiet that they are easily missed. In the noise of life you may not notice an invitation to a new career or a marriage, and you may be distracted when out of the air a message comes that a new home is waiting for you.

"Reading in silence and stillness invites these life-shaping intuitions. This is one way I understand the many old paintings and icons of the Virgin Mary sitting alone in a room, reading a book, as the angel Gabriel appears with his extraordinary message: 'You are going to conceive something wondrous and divine!' I imagine all our important conceptions and concepts arriving with the announcement of an angel. But we don't always recognize the presence of angels, so subtle is their embodiment. Libraries offer an active kind of silence, and I would expect to find many angels like Gabriel in them, as in the scene from Wim Wenders's film Wings of Desire in which angels pay a visit to a modern library." 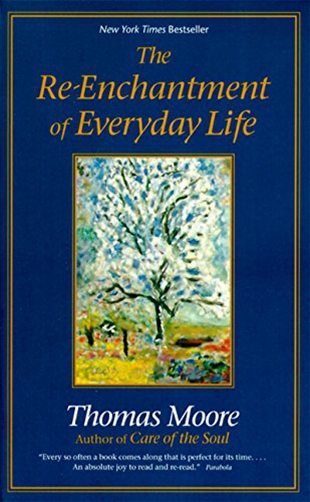