"As we were flying today from Denver to Boston, we encountered a beautiful sight, a vision if you like. Out the window of the airplane was a ring of light reflected on the clouds, a rainbow that followed us wherever we went. In the center of the rainbow ring, in the distance, there was what seemed to be a little peanut shape, a little shadow. As we began to descend and came closer to the clouds, we realized that the peanut shape was actually the shadow of the airplane surrounded by the ring of the rainbow. It was beautiful, miraculous in fact. As we descended further into the depths of the clouds, the shadow became bigger and bigger. We began to make out the complete shape of the airplane, with the tail, the head, and the wings. Then, just as we were about to land, the rainbow ring disappeared and the shadow disappeared. That was the end of our vision.

"This reminded me of when we used to look at the moon on a hazy day and see a rainbow ring around the moon. At some point, you realize that it is not you looking at the moon but the moon looking at you. What we saw reflected on the clouds was our own shadow. It is mind boggling. Who is watching who? Who is tricking who?

"The approach of crazy wisdom here is to give us hope. There is no hope of understanding anything at all. There is no hope of finding out who did what or what did what or how anything worked. Give up your ambition to put the jigsaw puzzle together. Give it up altogether, absolutely; throw it up in the air, put it in the fireplace. Unless we give up this hope, this precious hope, there is no way out at all.

"It is like trying to work out who is in control of the body or the mind, who has the closest link to God — or who has the closest link with the truth, as the Buddhists would say. Buddhists would say that Buddha had the truth, because he didn't believe in God. He found that the truth is free of God. But the Christians or other theists would say that the truth exists because a truth-maker exists. Fighting out those two polarities seems to be useless at this point. It is a completely hopeless situation, absolutely hopeless. We do not understand — and we have no possibility of understanding — anything at all. It is hopeless to look for something to understand, for something to discover, because there is no discovery at all at the end, unless we manufacture one. But if we did manufacture a discovery, we would not be particularly happy about that later on. Though we would thrive on it, we would know that we had cheated ourselves. We should know that there was some secret game that had gone on between 'me' and 'that.'

"So the introductory process of Padmasambhava's crazy wisdom is giving up hope, giving up hope completely. Nobody is going to comfort you, and nobody is going to help you. The whole idea of trying to find the root or some logic for the discovery of crazy wisdom is completely hopeless. There is no ground, so there is no hope. There is also no fear, for that matter, but we had better not talk about that too much." 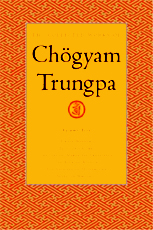