The Power of Now A Guide to Spiritual Enlightenment

"In life-threatening emergency situations, the shift in consciousness from time to presence sometimes happens naturally. The personality that has a past and a future momentarily recedes and is replaced by an intense conscious presence, very still but very alert at the same time. Whatever response is needed then arises out of that state of consciousness.

"The reason why some people love to engage in dangerous activities, such as mountain climbing, car racing, and so on, although they may not be aware of it, is that it forces them into the Now — that intensely alive state that is free of time, free of problems, free of thinking, free of the burden of the personality. Slipping away from the present moment even for a second may mean death. Unfortunately, they come to depend on a particular activity to be in that state. But you don't need to climb the north face of the Eiger. You can enter that state now.

"Since ancient times, spiritual masters of all traditions have pointed to the Now as the key to the spiritual dimension. Despite this, it seems to have remained a secret. It is certainly not taught in churches and temples. If you go to a church, you may hear readings from the Gospels such as 'Take no thought for the morrow; for the morrow shall take thought for the things of itself,' or 'Nobody who puts his hands to the plow and looks back is fit for the Kingdom of God.' Or you might hear the passage about the beautiful flowers that are not anxious about tomorrow but live with ease in the timeless Now and are provided for abundantly by God. The depth and radical nature of these teachings are not recognized. No one seems to realize that they are meant to be lived and so bring about a profound inner transformation.

"The whole essence of Zen consists in walking along the razor's edge of Now to be so utterly, so completely present that no problem, no suffering, nothing that is not who you are in your essence, can survive in you. In the Now, in the absence of time, all your problems dissolve. Suffering needs time; it cannot survive in the Now.

"The great Zen master Rinzai, in order to take his students' attention away from time, would often raise his finger and slowly ask: 'What, at this moment, is lacking?' A powerful question that does not require an answer on the level of the mind. It is designed to take your attention deeply into the Now. A similar question in the Zen tradition is this: 'If not now, when?'

"The Now is also central to the teaching of Sufism, the mystical branch of Islam. Sufis have a saying: 'The Sufi is the son of time present.' And Rumi, the great poet and teacher of Sufism, declares: 'Past and future veil God from our sight; burn up both of them with fire.'

"Meister Eckhart, the thirteenth-century spiritual teacher, summed it all up beautifully: 'Time is what keeps the light from reaching us. There is no greater obstacle to God than time.' " 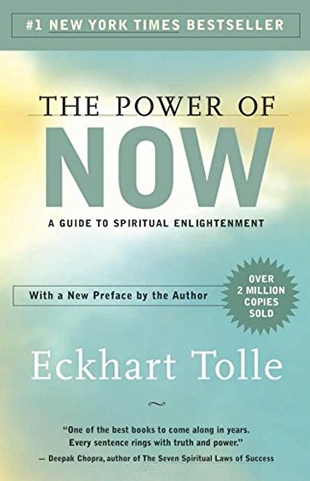