By Ronald Rolheiser
Ronald Rohlheiser on how Mary models faith as she ponders while standing in silence beneath the cross of Jesus.

The Notion of Pondering

"The one quality that perhaps most deeply exemplifies Mary's faith and discipleship is contained in single phrase predicated of her: she pondered. Mary pondered while the others did not. What does it mean to ponder in the biblical sense?

"We need to make an immediate distinction here: one can ponder in the Greek sense and one can ponder in the Hebrew sense. Pondering in the Greek sense might aptly be defined by an expression that comes to us from the Greek philosophy: the unexamined life is not worth living. Our commonsense notion is very much tied to that notion of pondering, where to ponder means to try to think something through in all its depth and implications. One pictures, for example, Rodin's famous sculpture The Thinker, someone sitting in a chapel or on a mountainside, intensely reflecting on something, mulling it over, considering all its various angles. But this would be what the word would mean had the Gospels been written by Aristotle. But the Gospels, while written in Greek, are Hebrew thought, and there, pondering has a different, more existential, connotation. Simply put, to ponder, in the Hebrew sense, meant to hold, carry, and transform tension so as not to give it back in kind, knowing that whatever energies we do not transform we will transmit. What does this mean concretely?

"On the surface it appears that she is not doing anything at all. She does not speak, does not try to stop the crucifixion, and does not even protest its unfairness or plead Jesus' innocence. She is mute, seemingly passive, overtly not doing anything. But at a deeper level she is doing all that can be done when one is standing under the weight of the cross, she is holding and carrying the tension, standing in strength, refusing to give back in kind, and resisting in a deep way. What is meant by this?

"Sometimes well-intentioned artists have painted Mary as prostrate under the cross, the wounded mother, helplessly distraught, paralyzed by grief, an object for sympathy. But that does not honor what happened there nor teach its lesson. Prostration, in this situation, is weakness, collapse, hysteria, resignation. In the Gospels, 'standing' is a position of strength. Mary 'stood' under the cross. She was strong there. Still, why the silence and why her seeming unwillingness to act or protest?

"In essence, what Mary was doing under the cross was this: her silence and strength were speaking these words: 'Today, I can't stop the crucifixion; nobody can. Sometimes darkness will have its hour. But I can stop some of the hatred, bitterness, jealousy, and heartlessness that caused it — by refusing to give it back in kind, by transforming negativity rather than retransmitting it, by swallowing hard, in silence, and eating the bitterness rather than giving it back in kind.'

"Had Mary, in emotional and moral outrage, begun to scream hysterically, shout angrily at those crucifying Jesus, or physically tried to attack someone as he was driving the nails into Jesus' hands, she would have been caught up in the same kind of energy as everyone else, replicating the very anger and bitterness that caused the crucifixion. What Mary was doing under the cross, her silence and seeming unwillingness to protest notwithstanding, was radiating all that is antithetical to crucifixion: gentleness, understanding, forgiveness, peace, light, and courage.

"And that is not easy to do. Everything inside us demands justice, screams for it, and refuses to remain silent in the presence of injustice. That is a healthy instinct, and sometimes acting on it is good. We need, at times, to protest, to shout, to throw ourselves literally into the face of injustice and do everything in our power to stop it. But there are times too when things have gone so far that shouts and protests are no longer helpful, darkness is going to have its hour, and all we can do is to stand under its cross and help absorb its bitterness by refusing to participate in its energy. In those situations, like Mary, we have to say: 'I can't stop this crucifixion, but I can stop some of the hatred, bitterness, jealousy, brutal heartlessness, and darkness that surround it. I can't stop this, but I will not conduct its hatred.'

"And that is not the same thing as despair. Our muted helplessness is not a passive resignation, but its opposite. It is a movement toward the only rays of light, love, and faith that still exist in that darkness and hatred. And at that moment, it is the only thing that faith and love can do. As the book of Lamentations says, there are times when the best we can do is put our mouths to the dust and wait! Sometimes too, as Rainer Maria Rilke says, the only helpful thing is to absorb the heaviness: 'Do not be afraid to suffer, give the heaviness back to the weight of the earth; mountains are heavy, seas are heavy.' That is not passivity, resignation, or weakness; but genuine, rare strength.

"That is what it means to ponder, in the Hebrew sense. This is what is predicated of Mary when the Gospels tell us that she 'pondered these things.' " 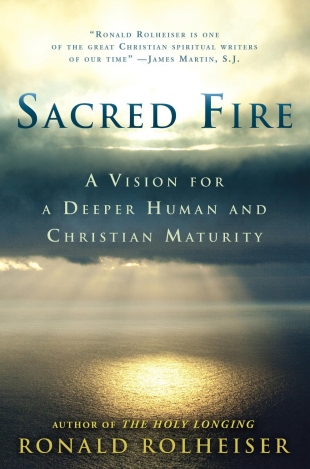