By Marney K. Makridakis
A creative resource packed with ideas that will take you to places not usually on your map.

"Fourteenth-century Christian mystic Henry Suso is thought to be the first to use the term ludus amoris, which is Latin for 'game of love' — a term that describes divine play and that has continued to be used in mystical traditions. A tradition I find particularly playful — and extremely helpful during challenging times — is the Hindu interpretation of sacred play.

"The Sanskrit word lila, like many Sanskrit words, cannot be literally translated to English but can be loosely translated as 'play.' It refers to the Hindu tradition wherein all reality is seen as play and our lives are thought to be the outcome of creative play by the Divine.

"It is this concept that inspires one of the most playful ways to get through a challenging time: imagine that you are an actor on a cosmic stage, given a role to perform.

"Picture yourself as a bundle of cosmic energy, happily relaxing in a cozy coffeehouse in deep space, sipping your beverage, looking down at what is happening on earth below. You then see that there is an opening for star actors (that's you!) to fill the role of a particular person: to be that person, with many difficult circumstances, and see what you can make out of them. You rise from your chair, enter the role without the emotional drains that so often accompany personal drama: no guilt, shame, pressure, or expectation. You simply put on your costume and enter stage right.

"It is said that when we make plans, God laughs. When you embrace sacred play, you get to laugh, too. During one of the most difficult challenges of my life, this playful method saved me and provided the perspective I needed to rise each day and decide to take on the role of playing me, intrinsically connected to the much bigger cosmic cafe of life." 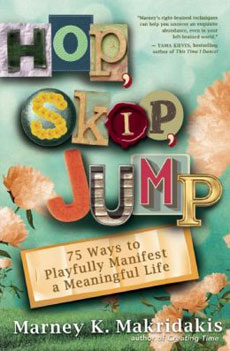