By Cynthia Bourgeault
An ambitious and scholarly tome with insights into a re-tooled version of the Trinity.

Cynthia Bourgeault is an Episcopal priest who leads lectures, workshops and retreats across the United States and internationally. She is profiled in S&P's Living Spiritual Teachers Project and has led several online retreats on this website. She is the author of eight books.

Bourgeault begins this scholarly tome with a reference to the Catholic theologian Karl Rahner who claimed that if the Trinity were to quietly disappear out of Christian theology and never to be mentioned again, most of Christendom would not even notice its absence. Bourgeault would not want that to happen. In this ambitious book, she sets out to re-tool this theological formula which has played such a large role in Christian theology. At the outset, she makes it clear that she does not believe that feminizing the Trinity is the right way to go in reimagining God. She hopes that her reclamation project will bring some light and heat to what she calls "this long winter of our Christian discontent."

After looking at Gurdjieff's law of three, Bourgeault sums up the theological insights into a new breed of Trinity by Catherine Mowry LaCugna, Raimon Panikkar, and Beatrice Bruteau ("the Trinity is a dynamic, generative, principle stamped into the very nature of created reality; it is both cosmic law and creative template"). What this means, Bourgeault asserts, is that this view of the Trinity can heal the division between scientific and biblical cosmology.

After delving into the arcane mysticism of Jacob Boehme, Bourgeault comes up with her own sevenfold understanding of the Trinity with the Heart of God, Word (Spirit), Substantiality (Holy Substantiality), Jesus, Holy Spirit, Kingdom of Heaven, and Oikonomia. She hopes that this re-tooling will "reunite our shattered cosmology, rekindle our visionary imagination, and cooperate consciously with the manifestation of Jesus' Kingdom of Heaven here on Earth." 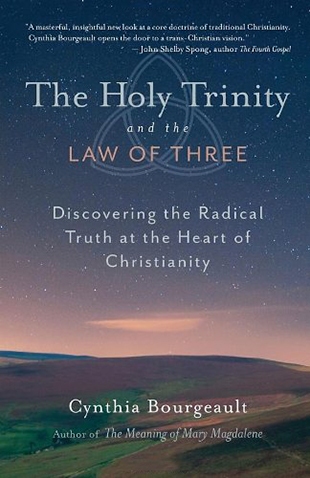