Dropping the Struggle Seven Ways to Love the Life You Have

By Roger Housden
A guide to a deeper response to the mystery of life than struggling to make things different than they are.

Roger Housden is the author of 22 books, including the bestselling Ten Poems series. His writing has appeared in many publications, including The New York Times, the Los Angeles Times, and O: The Oprah Magazine. A native of England, he lives in Marin County, California, and teaches workshops and leads pilgrimages around the world. Housden is profiled on S&P as a Living Spiritual Teacher and has taught two E-Courses now available on-demand: Poetry to Transform Your Life and Poetry to Nourish the Soul.

In the introduction to Dropping the Struggle, Housden confesses that he has spent a large portion of his time and energy struggling with life: "However well things were going, I often felt that something was not quite right. Either I didn't want what turned up in quite the form it appeared, or I wanted something else that never quite materialized in the way I would have hoped. Always there was the pervasive feeling that something was missing, something I couldn't quite put my finger on." We're sure many people will relate to this!

In time, Housden comes to a deeper response to the mystery of life than struggling with it. For one thing, he finds ways through life in poetry. At the beginning of each chapter, he offers suitable poems as probes: Tammy Hanna's "Release," Ellen Bass from "Relax," a poem by Kabir, Derek Walcott's "Love After Love," Juan Ramun Jimenez's "I Am Not I," William Shakespeare's "The Tempest," and Chuang-Tzu from "The Second Book of the Tao."

With admirable honesty, wisdom, and authenticity, Housden presents seven ways to love the life you are living. Like many spiritual writers, he frames these activities positively but sees them as requiring us to cut back, prune, or let go. The first one is dropping the struggle to be special. With dramatic intensity, the author describes a dangerous situation in which he found himself in Tehran where he felt totally alone, unloved, and cut off from others. During this ordeal, Housden's habit of seeing himself as special and set above others was smashed and instead he opened inside to humility, "a vivid aliveness" that says "Yes" to life right now.

Our culture feeds our ego and fills our heads with the fantasy of control with the result being a struggle for perfect life. The Tao shows us how to drop this one: ""Let go of all your assumptions / And the world will make perfect sense." This path requires us to recognize and accept our limitations and vulnerabilities and to be kinder to ourselves.

In the chapter on dropping the struggle for meaning and purpose, Housden shares from a personal obituary he did for a writing exercise. He says that intimacies with extraordinary women opened his inner and emotional life and served as a doorway to the transcendent. Describing the last stages of his life, he writes that he came to "appreciate the gifts and beauty of ordinary human existence, and found his deepest meaning and most luminous moments there."

One of the many salutary things about this book is the author's choice of struggles that are universal and irksome to anyone who has sampled the wisdom of a variety of religions and spiritual quests. In dropping the struggles for love, with time, with change, and to know, Housden hits high stride with meditations on the detachment that heals the heart, the self-talk and random thoughts that shut down connection with others, the magical workings of grace, the emptiness of riding the hamster wheel of life, the pleasure afforded us through leisure, the marvels of life in the worlds of stillness and movement at the same time, and aligning ourselves with truth in the midst of change. He concludes with praise of the contentment that resides in "the loving silence that encompasses all things in a seamless intimacy of the one mysterious life that animates everything and everyone." 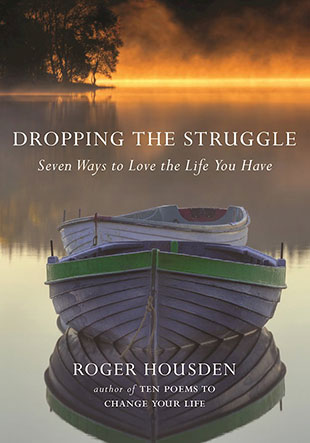