Mom, There's a Bear at the Door

By Sabine Lipan
An amusing children's book about the ways kids can create worlds aglow with both reality and fantasy.

Part of the fun of childhood is finding amusing ways to exercise our imaginations to create worlds aglow with both reality and fantasy. That is what's going on in this enjoyable and entertaining children's book by Sabine Lipan, who has published a dozen previous titles.

A very inventive boy and his question-filled mother are the main characters in this family drama. The boy tells his mother that there's a bear at the door of their eleventh floor city apartment. When she asks how the bear got there, he answers, "He took the elevator." We learn more: the bear took the bus to the city after paying for a ticket. He rode a bicycle from his home in the forest to the bus stop. Why has he come? The boy responds that he wants to look out the window to see the sea because "he can't see it in that thick forest." And he wants to have some cakes.

Children from the ages of 4 to 8 will enjoy the creative antics of the little boy who uses his imagination to create reasonable explanations for absurd situations. Best of all is the mother who has both the kindness to listen and the curiosity to ask so many questions in return. 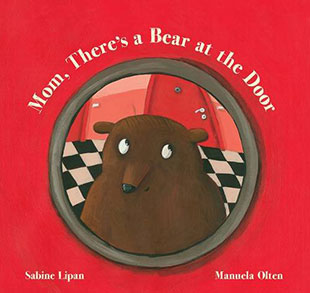