The Time Is Now A Call to Uncommon Courage

By Joan Chittister
A watershed work that succeeds in its noble goal of drawing out the prophet in us.

Joan Chittister joined the Benedictine Sisters of Erie at the age of 16 and has spent over 60 years charting the rigorous and adventuresome path of Christianity. With bravado, incredible energy, and abundant spiritual insights she has challenged all of us to combine contemplative practices with social action.

Chittister is a major voice and committed activist for the rights of women and poor people. She is the executive director of Benetvision, a resource and research center for contemporary spirituality, and the co-chair for the Global Peace Initiative of Women. One of her projects collects spiritual resources for those in prison. In the midst of this deluge of sacred activism, she has not downplayed her constant interpretation of Benedictine spirituality. Chittister is the author of over 50 books and has appeared on Oprah's Super Soul Sunday, On Being with Krista Tippett, and countless other media outlets.

The Time Is Now: A Call to Uncommon Courage arose out of Chittister's concerns about the selfishness, power plays, narcissism, violence, lies, and prejudice of politicians and citizens who have seized the moment to take America on what they perceive to be a path of glory. To counter those impulses, Chittister turns to the prophets who in their times sought to usher in a brand new day of justice, freedom, peace, and transformation.

Her definition of prophetic spirituality is inspiring and challenging. It was modeled by Jesus the Prophet who encouraged acceptance of others and the call to co-creation. Chittister elaborates:

"Prophetic spirituality calls us to walk in the wake of the biblical prophets of ancient Israel, to hear the word of God for the world and repeat it, shout it, model it until the world comes awake. It is to demand it until the hungry are fed and the sick are cared for and the violent are sent away empty of their power to destroy."

Prophets of old and in our own times "look at life as it is — hard of heart for many, unfair for most — and set out to expand it." Chittister's intention is to bring out the prophet in us:

"Faith is invalid unless you are living it. That is the basic message of the prophets and it is as true today as it was thousands of years ago. Prophetic spirituality is an active spirituality that demands as much rock-hard commitment as it does heart-felt concern."

In a series of profound and hard-hitting chapters Chittister delineates character qualities which can animate us including risk, paradox, authenticity, self-giving, patience, confidence, wisdom, and faith.

She pays tribute to the inspiration and courage of Mother Teresa, Dorothy Day, Gloria Steinem, Dr. Martin Luther King, Jr., and others who stir our souls and send us to the streets to bring our spirituality alive.

The Time Is Now: A Call to Uncommon Courage by Joan Chittister is a watershed work that succeeds in its noble goal of bringing out the prophet in us. We will not, she promises, be alone. Prophets are already among us. In the book's dedication she reminds us:

"In every region, everywhere, they are the unsung but mighty voices of community, high-mindedness, and deep resolve. They are the prophets of each era who prod the rest of the world into seeing newly what it means to be fully alive, personally, nationally, and spiritually." 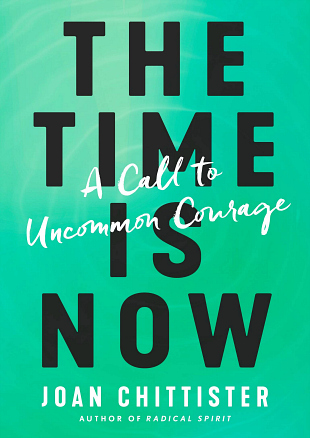