By Thich Nhat Hanh, Sister Chan Khong (Foreword)
A classic from one of the most profound spiritual teachers of our time with a substantive new foreword.

We reviewed the first edition of this book when it was published more than three decades ago. Since then, it has impacted thousands of people, and “interbeing” — meaning the interconnection of all things — has become a term in common use among spiritual practitioners all over the world.

There have been three other editions since that first groundbreaking one in the 1980s. This is the fourth, and probably the last. Thich Nhat Hanh is at the end of his life. His writing and retreats and public appearances came to an end a few years ago.

We won’t repeat our review from the first edition; most of the book remains the original classic. There have been some small changes; for instance, the fourteenth training has expanded from its original name and idea of “Right Conduct” to “True Love.”

We will focus instead on the foreword to the Fourth Edition, by Sister Chan Khong. It is a substantive contribution, written by the first fully ordained monastic disciple of Thich Nhat Hanh, who is also today the elder nun of the International Plum Village Sangha.

Sister Chan Khong explains how she came to be a nun and developed an interest in opening the teachings of the Buddha to women: “As a young person, I was deeply impressed by the teachings of the Buddha Sakyamuni. This led me to intensify my work helping hungry children in the slums of Saigon, and to make the decision to leave behind my boyfriend of five years to become a Buddhist nun. But when I visited nunneries in Saigon, Ben Tre, and other places, the nuns told me to practice well so I could be reborn as a man and become a Buddha.”

She continues by saying that she disagreed with this notion, and she wasn’t very interested in being enlightened. “I only cared about helping hungry children, poor people, and suppressed people. I decided to set up my own nunnery.”

This is the new Engaged Buddhism.

Sister Chan Khong goes on to explain how, then, she met Thay (which is what Thich Nhat Hanh’s students call him), and he understood her perfectly. He persuaded her not to become a nun yet, and gave her these teachings — the Fourteen Mindfulness Trainings — which overwhelmed her with joy.

“Thay felt that Buddhism had much to contribute to real social change. He wanted to find ways to support a movement for social change according to the Buddhist spirit. He said he would help my friends and me with our social projects.” She then goes on to chronicle the impact of the Fourteen Mindfulness Trainings on the people — students, social workers, Buddhists, non-Buddhists — of her generation and the last half-century.

She concludes, “When there is great understanding and love, you can call it God in you, or you can call it the Buddha nature in you. Nevertheless, developing great love demands training.” 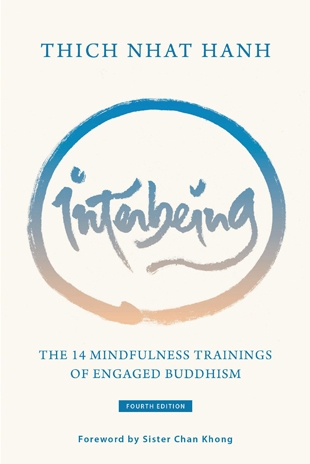