Another Appalachia Coming Up Queer and Indian in a Mountain Place

By Avashia Neema
Growing up Asian American, queer, and Hindu in rural America.

Neema Avashia was raised in Appalachia, the child of immigrants from India. The place she knows best is Cross Lanes, West Virginia, home of Tudor’s Biscuit World where a culinary treat is “a hash brown smothered with bottled cheese, sandwiched between two halves of biscuit … the only vegetarian item on the menu.” And then there is the India taught her by an extended family of “aunties.”

Today, Neema is a middle school teacher in Boston. She writes well, with moral clarity, about union fights in the Boston Public Schools, and sometimes disapprovingly about her father’s “ethics of assimilation” working for a giant chemical corporation, Union Carbide. Avashia learns from her past and is continually using its lessons to inform who she wants to be in the present.

There are very few memoirs of Hindu experience in the United States. The passages about Hindu celebrations in Appalachia, and the pull they continue to have on Avashia, are fascinating. She has, for instance, memories of Indian women gathering in a circle in a basement to celebrate the festival of Navratri for nine nights in a row. They were all the wives of Union Carbide employees. In contrast, Avashia writes that now: “I live in Boston and have no Indian community to speak of. There are weekend Navratri garbas in the suburbs, massive gatherings of Indians I do not know…. I feel no pull to go to these anonymous celebrations, where ritual feels meaningless in the absence of relationships.”

Nevertheless, she has yearnings, when the sound of Navratri comes over the car radio, still to “sing praises to Durga Mata, the Mother goddess.”

She grew up in West Virginia mostly among white children “whose parents allowed them to dress in tight clothing, wear makeup, and put chemicals in their hair. Whether because of my awkward appearance, my brown skin, my yet-to-be-realized sexuality, or some combination of the three, dating was also never an option for me.” According to her parents, “a good Indian girl was docile and feminine.”

But she was taught by several aunties (“my many mothers”) who we meet in these pages, together with Hindu ritual and goddesses and tradition, “how to live a righteous life.”

As an adult, Avashia explains, “ritual has fully supplanted faith when it comes to the question of religion.” Her wife, Laura, is the child of a Catholic father and a Jewish mother. Together they often celebrate Navratri in October and Diwali in November. In December they have a menorah and a Christmas tree in their living room.

Themes of beauty, womanhood, identity, and discovering personal meaning abound in this memoir. Late in the book Avashia remembers poignantly: “My mother says the hair we are born with isn’t our own; it belongs to the person we were in our past life. So what does it mean that my first head of hair — the soft, bronzy-black ringlets of my toddlerhood — is still her favorite?”

According to Hindu ritual, that baby hair is shorn in order “to release the old soul and make room for the new” — and that’s the kind of discovery that Another Appalachia is all about.

try a spiritual practice on meaning 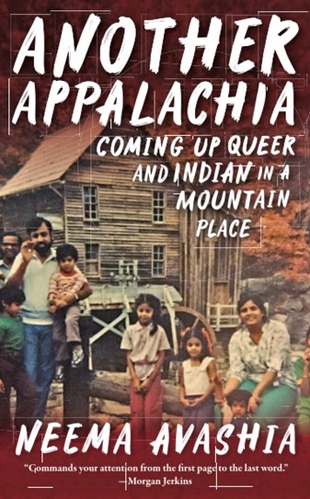