By Scott McDermott
Support for following even seemingly impossible dreams.

If a child in your life is a bit young for questing classics like The Little Prince or The Hobbit and you want to share with them what it means to follow your dreams, look no further than Ingrid the penguin, brainchild of photographer and filmmaker Scott McDermott. Ingrid has a weird ambition for a penguin: to fly.

Despite her friends' taunts and her mother's over-protective wing, Ingrid manages to hook up with lost pigeons from New York City, Lenny (sporting a hat with a Yankees insignia) and Sue. They tell her of a place in upstate New York where she can probably learn to fly, and they encourage her to meet up with Lenny's cousin Lou if she can make it as far as New York. And so the fun begins.

Illustrator Christine Anderson gives us a wallopingly clear understanding of what Ingrid is up against when we see her standing tall but tiny in front of a huge cargo ship that she thinks may be able to transport her. She has unflappable courage against daunting odds — as well as ingenuity, when she offers to help the crew get through the thick ice in the area, since she knows where it's passable.

By allowing human characters to be as surprised as we are that a penguin can talk, McDermott allows the fiction to flow. He sprinkles in ample, citified humor to reinforce the story's credibility. When Ingrid finally reaches New York City, for instance, and waddles up the street with a pigeon guide she's discovered, "all the New Yorkers just hustled by without even giving them a second look. Some people even got a little annoyed because they were walking too slowly." McDermott quips, "New Yorkers were too busy doing their own thing, like New Yorkers do."

Accompanied by such humor, Ingrid passes through the stages of questing at a level that children can understand: Her initial boldness gives way to disorientation and confusion; she worries about being lost when she doesn't recognize a landmark she needs to find; and she faces self-doubt about being able to complete her search. But after many twists and turns of adventure, she manages to get to the Lake Placid Olympic Ski Jumping Complex and fortuitously meets the skiing coach, who agrees to get her all set up. When she crashes at the end of her first jump, she's nonetheless super happy and leaps up, yelling, "Let's do it again!"

Equally as endearing as her indomitability is her eagerness to bring her newfound expertise back to her colony and to use it to ease their traffic problems. ("Most penguins spent a good deal of the day going to and from the sea, bumping into each other ...") A true hero, she sets aside any hurt feelings from the bygone days of taunting and passes on the fruits of her quest.

Children ages five to seven will benefit most from this book, but people who are only young at heart — especially those with affinity for New York — will find it quirkily delightful. In a jaded era, we need all the help we can get to tilt at windmills ... or to tilt properly when lifting off from an icy Antarctic slope. 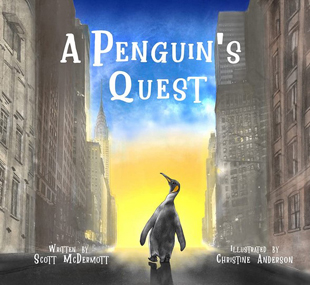