Mychal Judge Take Me Where You Want Me to Go

By Francis DeBernardo
A Franciscan friar who suffered, listened, and became a 9/11 hero.

Father Mychal Judge made headlines on September 11, 2001, immediately following the attack on the World Trade Center in New York City, as accounts of his heroism and self-sacrifice were made known. A Franciscan friar and priest, he was also a fire department chaplain, and rushed to Lower Manhattan as soon as he heard of the attack and pending disaster. He was there to pray for the firefighters, to be with them in a time of need, and also to attend to and anoint the wounded and dying. He died when the South Tower collapsed. He was in it.

He was baptized Robert Emmet Judge, the child of Irish immigrant parents in Brooklyn. (The name “Mychal” came later, in religious life. See below.) His father died when he was only six. It was the Great Depression then, and Emmet began shining shoes outside Penn Station. It wasn’t long before he then began visiting nearby St. Francis of Assisi Church on West 31st Street, meeting Franciscan friars, and sensing a calling to religious life.

Judge’s life was full of pain and helping others in pain. This priest’s suffering is shown by author Francis DeBernardo in a troubled childhood of losing a father early and having to struggle to survive; later, in the difficulty of being an alcoholic and becoming a recovering one; and in the trials of living as a gay man in a vocation that is rarely kind to LGBTQ+ people.

Yet he became known as a friend to all and as a friar and priest who was always interested in including another new person into a circle of familiarity. Early in ministry, a newspaper article was written about him with the headline: “The Listening Priest: A priest who can’t say no.”

That newspaper account followed an extraordinary day when Judge climbed a fire ladder to a second story window in his brown robe and sandals to personally convince a man holding his wife and children at rifle-point to put down the weapon and surrender. Judge then remained the man’s friend throughout his trial and subsequent prison stay.

The saint of Assisi, Saint Francis, was his guide and inspiration, leading Father Judge to “[see] God and goodness everywhere and in everyone, no matter how small or outcast.” Judge expressed this faith and love to people throughout his life, for instance, as an active participate in Alcoholics Anonymous, ministering to families through his parish, and in work with the New York City fire department, especially, to ultimate effect, on the fateful day of 9/11.

It was the process of self-scrutiny and honesty with oneself that led Father Judge to address his sexuality, which was a painful process, particularly given his position as a priest in the Roman Catholic Church, which taught that being gay was disordered. It is unknown for certain, says DeBernardo, why Judge ultimately changed the spelling of his priestly name from “Michael,” which he’d taken to honor his dead father, to “Mychal,” but he offers this:

“A change of names fits a common pattern for many gay men, especially of that era, who, after coming to terms with their sexual identity, select a new way by which they will be known. The emotional impact of self-acceptance is often so profound, a sort of rebirth, that adopting a new identifier feels appropriate.”

See our website for more resources about Father Mychal — including a review of a 2006 documentary, Saint of 9/11, that profiled him. 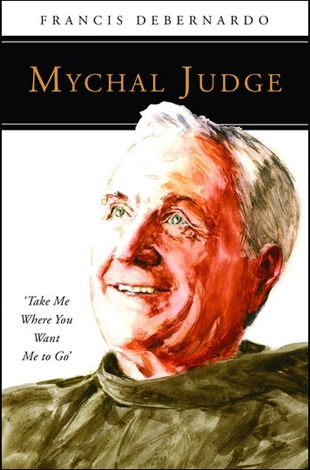