Every Dog in the Neighborhood

If you are the least bit fond of dogs and have opportunities to be around them, you will know that each dog and dog owner's idiosyncrasies can be a source of great delight. If you live in a neighborhood with lots of dogs, this delight will be compounded by encounter after encounter with the likes of Mosley, Calypso, Lilla, Oliver, Rusty, and other fine representatives of the canine breed. They'll create openings so that you can meet their owners, too!

Philip C. Stead, author of the Caldecott Medal winning A Sick Day for Amos McGee, understands this dog-encounter dynamic and gives us a book packed with humor, tenderness, and community spirit. Our narrator, Louis, lives with his grandmother, and one day casually mentions to her that he wishes he had a dog. She replies, "Nonsense! There are enough dogs in the neighborhood already." But when Louis asks how many, she doesn't know. This gives her an opportunity to write a letter to City Hall, conveniently enough, because she has been eyeing a vacant lot in their neighborhood with the thought that it might make an excellent dog park. In order to make a case for this lot transformation, she'll need data.

Stead doesn't tell us this directly. We discover it subtly through Matthew Cordell's brilliant and endearing illustrations, as we see Louis and his grandmother gazing at the abandoned city property.

When they learn that the City doesn't keep an official count of their neighborhood's dogs, they take it upon themselves to be neighborhood dog surveyors. "Louis," Grandma says, "sometimes if you want something done you've just got to do it yourself."

As they head off on their quest to connect with neighbors, both human and canine, every detail amuses or touches us. For instance, the things Louis needs for his venture and pops into his backpack include two chocolate-chip cookies and a fancy pen. And in the interest of being thorough, Louis knocks on the door of their neighbor, Mr. Pierce, even though he doesn't have a dog. Mr. Pierce shows Louis a picture of Harvey, the dog he used to have, saying "he will always live in my heart." Louis asks whether Mr. Pierce's heart lives here, and, receiving an affirmative answer, writes down on his survey, "1. Harvey."

This inclusion of a physically absent yet heartwarmingly present dog is only the first of twenty encounters, each unique, quirky, and irresistible. One dog, Yoshi — whose name means "goodness" in Japanese — eats socks, and so is not really living up to her name. Another, Ogre, is a guide dog who helps his human all day long and never complains.

Amid all this meeting and greeting, Grandma and Louis are not only collecting information but also connecting in ways that will aid her quest to establish a dog park. And not only does Louis get to meet all these wonderful dogs, but he also receives a special surprise that makes the encounters even more worthwhile.

We, too, as readers, reach the end feeling that a very special surprise has fallen into our hands — in the form of this book. It's officially designated for readers ages four through eight, but even at 66, I think I've discovered a new favorite. 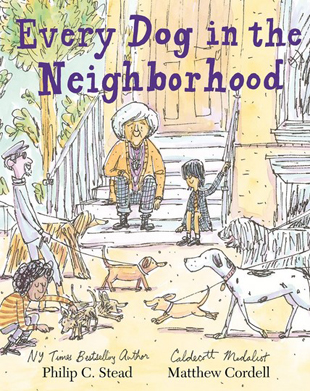