This new book by Rabbi Rami Shapiro is a glimpse of the Judaism I’ve been journeying towards for years. As a fellow rabbi and student of Rabbi Shapiro, with exposures to the same movements and teachers, I find his vision less shocking than it may be to others with a more conventional Jewish foundation. It is precisely a conventional Jewish foundation that this work seeks to destroy.

Rejecting arguments that Jewishness is a race or ethnicity, the book presents Jews as “a tribe, a three-thousand-plus-year-old family” and then strives to differentiate between being a tribe and being tribal. The former connects you to others with a shared story; the latter separates and elevates your tribe from and above others. Many ancient Jewish texts and ideas are tribal, and these ideas have been codified and strengthened over millennia. But contemporary Judaism need not be tribal, and Shapiro shows us how to become the best tribe we can be.

At the core of Judaism without Tribalism, we find two essential, traditional, and familiar ideas presented in new and compelling ways. The first is the process of teshuvah, meaning turning, and understood here as “returning to your true nature as tzelem elohim – manifestings of the divine.” The second is the obligation for tikkun, “repairing the world with justice and compassion by being a blessing to all the families of the earth, human and otherwise.” This obligation should not be confused with the more conventional idea of “being a light to the nations,” which is most often used to assert that Jews and Judaism have something better and godlier to offer other peoples.

Shapiro’s theology is decidedly universal, rejecting the many gods of the many belief systems in favor of the single God, “the greater Reality manifesting in, with, and as all being.” The original name of God in the Hebrew Bible, the four-letter name represented here by YHVH, is a timeless verb connected with being. But Judaism and, by inheritance, Christianity, lost this God concept when YHVH (what is known as the tetragrammaton) was replaced by “Lord” in translations, along with all of the problematic images and meanings that image entails.

The most challenging section of this book may be the chapter entitled “Who is a Jew?,”as here Shapiro forces Jews to look in the mirror and face our obsession with Jewish identity at the expense of meaning. Arguments around issues of descent, denomination, intermarriage, and conversion obscure the question of what is a Jew and what Jews do. In this system, along with return and repair, Jews seek liberation, high ethical and environmental standards, the just use of money, and demand true justice, ethical speech, and constant learning with the goal of wisdom.

The most unique aspect of Shapiro’s approach is his courage to reject conventional Talmudic interpretation and turn directly to the Torah to distill the essence of Jewish morals and practice. I have long asserted the need for such an approach myself. Even in most contemporary and progressive Jewish circles, being egalitarian or feminist most often means giving women access to roles and practices created by, and long reserved for, men. Only by returning to the original texts and starting again can a truly feminist, egalitarian, non-binary, contemporary Judaism evolve. Here, Shapiro does this, lifting up morals and ethics and presenting practices, including kashrut, Shabbat, and the holy days, that will continue to make Judaism meaningful to the individual and community and a blessing to the world. If I challenge him in any way, it is to completely abolish the gendered inequity in Torah and present a thoroughly egalitarian vision of Judaism for the present and future.

It may seem that you need to be Jewish to appreciate this book. Certainly, familiarity with Jewish texts, practices, and communities will make some things clearer, but I believe much of what Shapiro has to say about Jews and our foibles and about Judaism and its potential will resonate for anyone interested in creating a religious life that is truly in tune with the Divine.

_____
Michal Woll is Rabbi of Congregation Shir Shalom in Milwaukee and coauthor of Mixed-Up Love: Relationships, Family, and Religious Identity in the 21st Century. 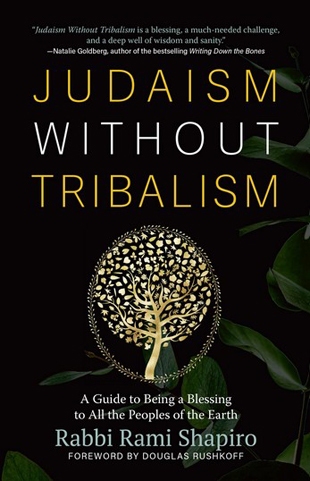