Words for the Heart A Treasury of Emotions from Classical India

There are subtleties here that will never be approached in a Wiki search. This is a book full of short anecdotes and literary, religious, and philosophical allusions and references. To understand Indian myth, experience, religion, and spirituality it is necessary to grasp what the sources have to say about the range of human emotions. That is what Maria Heim, a professor of religion at Amherst College in Massachusetts, offers.

Human emotions haven’t changed in these thousands of years. Neither have the early sources. Heim mines them on our behalf.

A total of 177 terms are arranged alphabetically from abhaya and abhijjha to vyatha and yoga. Yes, you’ve heard of that last one! But have you heard yoga described as “the discipline of calm” in Sanskrit and Pali? And have you been taught — from Patanjali, author of the Yoga Sutras — that “Yoga is ceasing the fluctuations of awareness”? Those are the first two sentences of this entry. It goes on for two more pages, including a reference to Samkhya metaphysics, the place of yoga in quelling the emotions in Indian ascetic religions, and the relationship between the Upanishads and the later philosophical system of Advaita Vedanta in the teaching and practice of yoga.

To get into the book further, I decided to compare it to a similar one on my shelf: A Concise Dictionary of Indian Philosophy: Sanskrit Terms Defined in English, by John Grimes (State University of New York Press, 1996). Maria Heim offers twenty pages on the letter D, defining fourteen terms. Nine of the same terms are defined in the older book from my shelf, even if some of the transliterations differ. But whereas the older book offers a definition of just a word or two, or a single sentence or two, Heim’s book offers nothing less than three-quarters of a page for each.

Here's one: “Dvesha” is offered in the older book as “antipathy; hatred; aversion…one of the five types of false knowledge according to Sankhya/Yoga.” Maria Heim explains a lot more, concluding with this paragraph:

“For Shankara [8th century Indian Vedic scholar], the therapy of hate is cognitive because hate is based on a fundamental ignorance. Because we falsely identify ourselves with the body, when something or someone assaults our body, we react, thinking ourselves harmed when in fact, the self (atman) is distinct from the body and untouched by its suffering. Correcting this delusion is the key to ridding ourselves of the vicissitudes of both hate and attraction.”

A thorough index at the back of the book includes dozens of English emotion words — such as agitation, amusement, bashfulness, and embarrassment — cross-referencing these with the Sanskrit, Pali, and Prakrit terms of the table of contents. 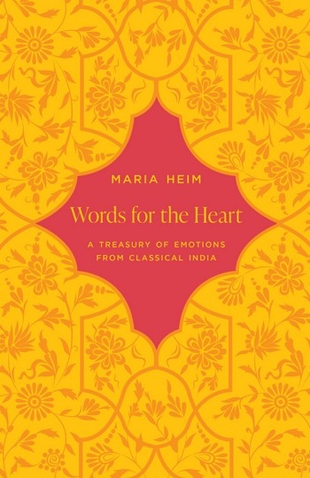