The Penguin Book of Spiritual Verse 110 Poets on the Divine

By Kaveh Akbar (editor)
Words that rise from human wonder at existence.

This collection of poets and poems startled and stimulated us. Books of poems around a theme are all-too-common, but this one is special. The editor is an Iranian American poet and professor of writing and poetry at Purdue University. His selections are inclusive, generous, often unexpected, and universal.

There are lyrical pursuits of spiritual wonderment as well as plain-speaking verses about cancer and other still-inexplicable aspects of human life.

The spiritual and religious traditions are well-represented, and so are the secular, agnostic, Nones, Earth-loving poets, and humanists. There are verses from the Quran, Psalms, and Song of Songs. The philosopher Lucretius is here, as well as several twentieth century poets who were not at all fans of God.

Mystic poets that appeal across the traditions — such as Hafez, Kabir, Rumi, Hanshan, and Mirabai — are present. Every new poem begins on a left-hand page with editors’ information about the author, the time when they lived and wrote, where they lived, and usually a translator. Beginning on the facing page is the poem.

John of the Cross and John Keats are both here, representing mystical formal faith and nature mysticism, both popular varieties in the spiritual verse category. Indigenous communities are also well-represented; in fact, one of the longest poems in the book (four pages) is from the Yoruba people of West Africa, ca. 1500.

A poem from the Aboriginal Australian poet Oodgeroo Noonuccal (d. 1993), “God’s One Mistake,” was one of our favorites. We hadn’t heard of the poet before. This one offers a good example of editor Kaveh Akbar’s excellent brief summaries — every poem has three or four sentences from the editor describing its content. He describes this one: “Spiritual poetry is generally expected to praise the divine – so much so, in fact, that 'poetry of praise' is often used as a synonym. However, this poem doesn’t seek to praise God, necessarily, but questions God’s decision to make humans, to imbue them with free will.”

A ten-page introduction from the scholar of poetry is also full of insights. For instance, this statement of purpose will surely be quoted by many others: “My working definition of sacred poetry rises directly out of my experience as a child praying in Arabic: earnest, musical language meant to thin the partition between a person and a divine, whether that divine is God or the universe or desire or land or family or justice or community or sex or joy or.” That’s how the sentence ends. Then, “What matters is the making of music and the sincerity of the making.”

Six of the poets in the book were still living when it went to press several months ago: Kim Nam-Jo of South Korea, Adonis of Syria, Adelia Prado of Brazil, Venus Khoury-Ghata of Lebanon, M. NourbeSe Philip of Trinidad and Canada, and Inrasara of Vietnam. 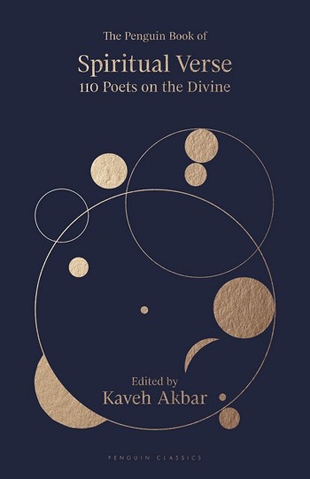