By Séverine Vidal
A long-awaited desire that's no match for the joy of giving.

The brilliance of The Coat lies in its believable perspective on how the practice of kindness emerges in the life of a child. Elise has coveted her older sister's coat for as long as she can remember. She loves not only its poppy red but also the maturity it symbolizes. She has a hard time controlling her desire to have it now, as she waits for her sister to outgrow it. When she finally receives a package containing the coat, she runs down the hall shouting, "Thank you, thank you, thank you!"

Her joyful, grateful response gets almost immediately tested. The next day, walking to school in the "penguin cold" with her sister, Elise sees a little girl dressed only in summer clothes huddled against a thin woman on cardboard near the steps of the town hall. After this revelatory sight, Elise finds that her "warm, soft, red coat ... hurt a little, kind of like a pinch." She can't even sleep that night.

Louis Thomas' illustrations add immeasurably to the story, revealing vivid emotions — from joy to uncertainty to angst to sympathy — through the characters' body language and wide-eyed facial expressions. When Elise arrives at school for the first time after seeing the chilled and unhoused family, for instance, we see happy students scurrying around her in the schoolyard while she stands stock still, stunned. The contrast underscores her puzzled anguish.

Naturally as readers we wonder with a strange mixture of hope and dread whether Elise will part with her coat. Séverine Vidal, whose many awards include the 2021 Prix des Incorruptible (ages 7 - 8) for the French edition of The Coat, has too much respect for children's psychology to allow such an ending. She knows that while fierce pricks of conscience can draw a child beyond selfishness, their acts of giving remain true to who they are. Elise finds a solution that betrays neither her affection for her coat nor her conscience. 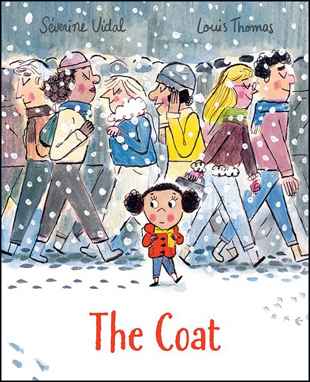