By Cynthia Bourgeault
A bold and visionary work reclaiming the lost cosmology of Wisdom.

Cynthia Bourgeault is an Episcopal priest, writer, and retreat leader. She is presently director of the Contemplative Society in Victoria, British Columbia. In this vigorous and bold visionary work, she sets out to reclaim the "lost" cosmology of Wisdom, which has been preserved in mystical and esoteric circles. She defines it as "a precise and comprehensive science of spiritual transformation that has existed since the headwaters of the great world religions and is in fact their common ground. The science includes both theory and practice. The theory part consists of a unified cosmology — in other words, a comprehensive vision of our human purpose and destiny. The practice involves a systematic training for growing into that purpose."

Although the first official Christian Wisdom school was the Desert Fathers and Mothers in the third through the fifth centuries, the idea that one should consciously strive to incarnate one's image of the divine was set aside when St. Augustine's doctrine of original sin came into favor. The Christian Wisdom tradition went underground but still continued in Benedictine monasticism, Meister Eckhart, Hildegard of Bingen, Jacob Boehme, and Valentin Tomberg. Of course, Orthodox Christianity never gave up its vision of theosis, the divinization of the human person.

Bourgeault is convinced that just when the Christian West scrapped theosis and the hope of human perfection, Sufism arrived as a form of Islamic mysticism. Through the works of Rumi and Ibn al-Arabi, the Wisdom tradition was kept alive. The author also salutes the work of G.I. Gurdjieff (1866-1949) for his efforts in creating tools for this way of knowing. Bourgeault salutes current-day spiritual teachers who have made their own contributions to this ancient tradition, including Kabir Helminski, Jacob Needleman, Bruno Barnhart, and Lynn Bauman. With chapters on three-centered knowing, transformation, freedom and surrender, and seeing with the eye of the heart, the author spells out the Wisdom way of knowing. She concludes with a discussion of presence, meditation, sacred chanting, and lectio divina as tools of Wisdom. 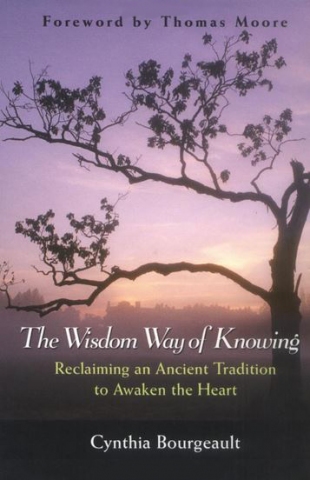