By Sharon Mehdi
A touching children's book for grown-ups about women and their yearning for peace.

Two grandmothers send quite a stir through their community when they decide one day to stand quietly in the park. Everyone wants to know what they are doing since they are "not speaking, not looking at squirrels, not munching on coconut candy." They are, in fact, doing nothing at all. Which in the eyes of many is a very subversive act! A young girl comes up with her own idea: "They're saving the world." This engenders the participation of other women, and soon more women join in the daily quiet standing. A reporter for a local newspaper pokes fun at the women for thinking that they could save the world. But more join their numbers and there is no stopping them — although all they have done is stopped doing anything.

In an afterword, author Sharon Mehdi describes how she came to write this parable for adults after moving to Ashland, Oregon. While she was coping with writer's block, she became a grandmother. She was then further inspired when a Native American elder told her that "men have taken the world as far as they can. It's up to the women to lead us the rest of the way." The Great Silent Grandmother Gathering proves that silence and hope and peace are sisters who point the way to a brighter future. 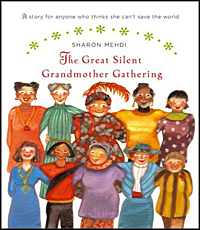