An Interview with Gary Kowalski

The author talks about his book Goodbye, Friend: Healing Wisdom for Anyone Who Has Ever Lost a Pet.

Why did you write a book about pet loss?

As a clergyman, one of the hardest but most satisfying parts of my job is helping families face the end of life. I dread getting the call when a death has occurred. But somehow, through grace and simply being willing to accompany another person through those dark places, one can help them begin to see how life might still be possible, even when the world has turned to ashes.

I started writing Goodbye, Friend when my own dog was eleven-years-old. At that stage, you glimpse the writing on the wall. But however prepared you might be intellectually, you’re never completely ready emotionally for the coup de grace. So the book was written partly as therapy, gathering up everything I knew about grief from my years in ministry, creating a sort of map to follow when the time finally arrived.

And with a congregation of several hundred members, I knew I might help others, also. Really, there’s very little support that can be expected when an animal dies.

What is different about the death of an animal?

We live in a death-denying culture generally. A hundred years ago, when someone died, the survivors wore black. There were visible signs of mourning everywhere, reminders as you walked about town that others were vulnerable, that daily events and transactions were framed by the doors of eternity.

Today, there may be a memorial service in the days following a death, but within a matter of weeks the expressions of sympathy begin to disappear. In the case of an animal, those expressions are likely to be minimal or missing altogether.

I hold an Animal Blessing at my church annually, on the Feast Day of St. Francis, and at those services always include a moment to honor departed pets. The first year I did so, I invited worshipers to come forward to light a candle of remembrance. I had ten candles ready, but fifty people came forward. The next year, I had fifty candles ready, but a hundred came forward. There’s an unacknowledged ocean of grief for these creatures.

The greater the love, they say, the deeper the sorrow. Our relationships with animals possess a purity that creates an almost magical bond.

What’s your standard advice to someone who’s grieving?

People need advice less than they need understanding and support. There’s no self-help “to do list” that can mend your spirit when it’s bruised and hurting. The magnitude of the loss first needs to be acknowledged and accepted.

That said, I always tell people to take extra care of their mental and physical health. Eat right and exercise. Spend time in nature. Avoid making any big decisions. This is not the time to get a new pet, nor the moment to vow you’ll never have another.

There’s no set timetable for grieving, but it usually takes months or more than a year for life to regain some kind of equilibrium.

How about helping children cope with the loss of a pet?

With children, honesty is the best policy. Parents sometimes try to shelter kids from harsh realities. They’ll use euphemisms, "We put Tiger to sleep," for instance, or "Ginger is in doggie heaven." Death is very mysterious to young children, but straightforward answers to their questions can alleviate many of their worries. If they sense adults avoiding they truth, they may conclude the topic is just too scary to talk about.

You can truthfully explain to children that when a pet dies, it doesn’t feel or experience anything. There’s no suffering. The body goes back to the earth. Death is a normal part of life, but it’s not something young children need to think about for a very long time.

Should there be a funeral?

Creating a ritual to say goodbye is a good idea, whatever your age. Ceremonies help us mark certain transitions as being "momentous" rather than merely momentary in their significance. That doesn’t mean leave-takings must be somber or long-faced. A friend, for example, assembled a congregation of toy animals to attend the memorial for her cat. My book has a whole set of suggestions and resources for celebrating the life of your companion.

What do you believe happens when we die?

That’s the big question, isn’t it? I like the last words of the nineteenth century preacher, Henry Ward Beecher. As his loved ones gathered round, he made his final utterance: "And now the mystery!" Despite being a clergyman, he really didn’t know what lay ahead. But he approached the threshold with a great deal of curiosity, hope and confidence.

Beliefs about the afterlife differ. Will we meet again? In the case of animals, the only writer of the Bible who directly addresses the subject is Ecclesiastes, who basically says, "Who knows?" My own core conviction is that whatever lies beyond, we needn’t be afraid. There’s more love waiting. 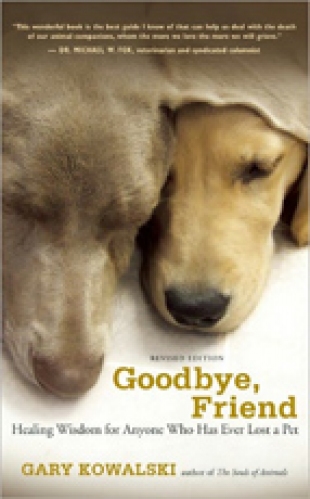