Upon This Rock The Miracles of a Black Church

By Samuel G. Freedman
Samuel Freedman on how a charismatic preacher reaches men of a congregation with a sermon about resurrection.

"It was inconceivable for Reverend Youngblood to talk about Christ and His miraculous powers. That kind of preaching was what drove black men from church in the first place. Where was Jesus and his hocus-pocus when ten percent of black men were unemployed, when their average life span was declining, when the leading cause of death for the young generation was murder? So Jesus goes into town and resurrects this dead dude, Reverend Youngblood could imagine his listeners asking. What does that have to do with me?

"The only strategy was to 'de-miraclize the miracle,' to speak less of the Resurrection than of its symbolism. Reverend Youngblood found in John 11 the analogues that could make the text contemporary. Bethany, a small and obscure town, resembled the Southern hamlets many of Saint Paul's members still considered home. The parentless household of Lazarus and his two sisters, Mary and Martha, reminded the pastor of the nonnuclear families so common in his congregation. The primacy of the sisters in dealing with Jesus struck him as akin to the overwhelming female presence in the black church, with its unspoken corollary that somehow women were closer than men to God. As for Lazarus, Lazarus was legion. . . .

[From Reverend Youngblood's sermon] "Let's be honest in this perusal of the Scriptures. Jesus arrives in Bethany. Mary and Martha are mixed in their greeting. 'We're glad you're here, Jesus, but if you'd been here sooner. If you had come when we called. If you had heeded the invitation when it was extended, Lazarus would not have died. But he's dead now. We're glad you showed up, but we've already pronounced ashes to ashes and dust to dust. He's dead.'

"Come forth, Lazarus. Break those chains. Throw off those fetters. Remove that napkin. Son of man, stand up on your feet." 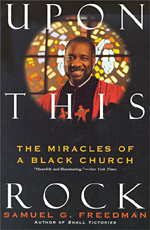