How to Free Your Mind Tara the Liberator

"Our drawers, closets, attics, and basements are stuffed to the gills. If we're lucky, we'll clean them out before Christmas to make room for new Christmas presents. How reluctant we can be to give things away! One time, I gave students at Dharma Friendship Foundation the homework assignment to give things away. First, they had to do something simple, such as clean out a closet and give away unwanted things. The next week, they had to give away something they liked. This homework assignment wound up lasting for several weeks because the first week, many people didn't do it. They needed to be reminded and given another chance. By the following week some people had moved the unwanted things as far as the front door or the trunk of their car. They still hadn't actually given them to others.

"Examining our attachment to material things can be eye-opening. Often we aren't aware of how we hoard things and of how difficult it is to part with possessions, even if they're ones we seldom use. But if we want to practice the bodhisattva path and far-reaching generosity, we need to overcome the eight worldly concerns in order to continuously increase our delight in giving.

"When I moved from Seattle, some of my things were given to different people in DFF. Later, when I visited some students, it was like a flashback. 'There's my dish. There's my quilt.' I had to remind myself, 'No they're not mine anymore. That label doesn't belong on them now. They belong to somebody else.' It was interesting for me to see that even after giving them away, the label 'mine' was still on them.

"Feeling miserable when we don't get material possessions or money occurs, for example, when we think somebody should give us a present and they don't, or when we don't get the things that we want. When somebody else has nicer shoes, a more expensive car, a better apartment, a more comfortable sofa, and so on, our mind desires these things and we're unhappy because we don't have them. This unhappiness and discontent arises due to our attachment. The problem isn't having or not having the things; the real problem is having the attachment that precipitates fear of not getting what we want or of losing what we have. Due to attachment, anger arises when our possessions and money are jeopardized.

"In Dharma class we may feel so renounced. 'I can give everything away. I'm not attached.' But when we leave the teaching and can't find our shoes, we growl, 'Who took my shoes?' We get angry when something simple, like our shoes, disappears.

"I love the story of the Buddha asking a stingy person to give a carrot from one hand to the other. Sometimes we can practice giving from the right hand to the left and back again. Then, we can try putting the carrot into somebody else's hand. A hand is a hand; it doesn't matter whether it's ours or somebody else's. It's the giving that's important." 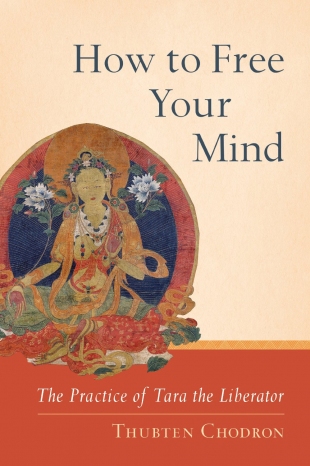