By Edward Tick
A disturbing account of the effects of the killing of civilians not only on the victims but on the combatants.

"Worldwide, 3.6 million people have been killed in wars since 1990, many in the fifty-five civil wars during that period. Nearly half of the dead have been children, 'reflecting the fact that civilians have increasingly become the victims in contemporary conflicts.' Carol Bellamy, executive director of the United Nations Children's Fund, witnesses 'the many ways conflict affected the lives of children — in Ugandan villages where they are abducted by rebels; in Congo, where they are systematically raped as a weapon of war; and in Iraq, where school enrollment has increased but so has malnutrition.'

" 'For me "collateral damage" is one of the most insidious phrases in the English language. At first brush it seems rather innocuous, but it means dead and wounded noncombatant women, children, men, elderly. It sanitizes death. I imagined the terror a typical family living in an apartment in Baghdad would experience. They awake at night to the sound of bombs falling on their city. They see fireworks in the sky, but not friendly fireworks! This goes on night after night. This so-called attack for liberation angers them. It will foster anti-American feelings and it will breed a new generation of terrorists.'

"The technology of destruction has progressed so far that, even if a combatant or civilian survives physically unscathed, he or she is bound to be gravely impacted by the terror it evokes. Richard Gabriel, a former intelligence officer in the Pentagon's Directorate of Foreign Intelligence and an expert on combat psychiatry, states, 'War has simply become too stressful for even the strongest among us to stand for very long.' Every participant in modern war inevitably experiences some degree of psychological, moral, or spiritual breakdown. William Manchester, a marine veteran of the Pacific theatre in World War II, comments regarding combatants in particular, 'No man in battle is really sane. The mind-set of the soldier on the battlefield is a highly disturbed mind, and this is an epidemic insanity which afflicts everybody there, and those not afflicted by it die very quickly.' Gabriel says bluntly:

" 'The simple fact is that men are crushed by the strain of modern war . . . All men are at risk of becoming psychiatric casualties and, in fact, most men will collapse given enough exposure to battle stress. There is no such thing as getting used to combat .. . . Studies of World War II soldiers revealed that about 2 percent [did] not collapse. But these men were already mad, for most of them were aggressive psychopathic personalities before they entered battle. It is only the sane who break down.'

"The archetypal dimensions of war — legends of heroic deeds, divine mentoring of the warrior inspired by elders, and battle conditions where these patterns could be lived out sufficiently to shape the soul — have been handed down through the generations to our present day. Yet modern conditions make the realization of these ancient and proven archetypes anachronistic, if not impossible. In modern war, combatants cannot become larger-than-life heroes. Rather, they are miniscule globules of armed protoplasm hurled at enemies in uncountable numbers. Massive death numbers, a scorched earth policy, and the technological weaponry to accomplish both are the hallmarks of modern war.

"In the moral and spiritual vacuum caused by this much destruction, the only meaning that remains is mere survival. And survival, now reduced to an accident in the midst of global carnage, is laden with a sense of unworthiness and guilt. As Manchester said about the battle for Okinawa during World War II, 'The fact remains that more than seventy-seven thousand civilians died here during the battle, and no one comes out of a fight like that with clean hands.' Under such conditions, the ancient mythic heroism, spirituality, and initiatory values of warfare are canceled out.

"Yet the mythic dimensions of war remain very much with us as universal patterns in the human psyche that we attempt to replicate in every epoch of history. Young men, and now women, too, still march off as individual combatants striving to live out the model of the mythic warrior-hero. Whether enlisted as recruits for official or paramilitary, military or insurgent, guerilla or terrorist forces, they are taught, and still believe, that their wills, values, and small arms can stand as Excaliburs against evil. But into what kind of arena do they carry their patriotism and their impulse for heroism and initiation? We are trapped in a terrible tension between the soul's craving for realization of the warrior archetype and the realities of a warfare that devastates the soul who seeks it." 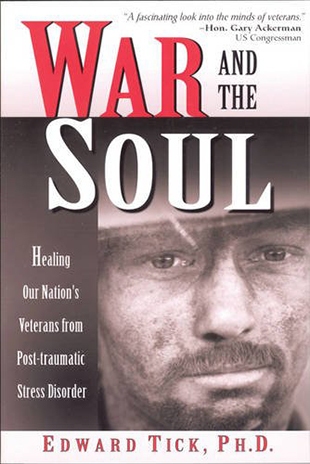