"Having reviewed stacks of literature about interreligious dialogue, I have gleaned a fairly consistent, universally agreed-upon list of conditions and intentions for authentic dialogue. The first condition is that it should be without any ulterior or covert motives. In the past, the motive for dialogue has often been either for conversion or to provide a forum for one or both partners to demonstrate the superiority of their own positions. Vineeth again: 'One cannot presuppose error as a condition of dialogue.'

"Second, one must come to the table with essential openness. Such openness refers to trying to understand not only what the partner says conceptually, but also what the other means and the reality the other is trying to convey. Because religious language is used differently in various traditions, this kind of openness requires both an intellectual availability to new ideas and theological paradigms as well as an intuitive openness to the deep truth the other is trying to communicate. Another level of openness is the ability to critically reassess one's own tradition. I must be free enough to truly be challenged. And finally, one has to be open to the process. This means not trying to predict or manipulate the dialogue experience. Perhaps it will be at times disagreeable. So be it. If I enter into a dialogue with another with the preconception that everything the other says that does not correspond to what I believe is wrong, this undermines the experience. In the same vein, if I enter into it with some need to accept anything and everything offered as if it were necessarily true, my openness is in the end dubious.

"Third, it is imperative that other religious traditions are respected in their own right and on their own terms. This is perhaps one of the central imperatives of interreligious dialogue: that traditions are taken seriously for what they are in themselves. This means, for example, not just regarding another faith as simply one of many manifestations of some common spiritual or mystical essence. Respecting other traditions in their own right also means being able to understand them and reiterate their central beliefs, practices, and spiritual ethos in a way that they themselves would recognize and agree with.

"Fourth, in the spirit of trust and openness, differences are not to be eschewed. Rather, they can even be highlighted. If we do not exploit differences between us, we can appreciate their power to challenge us to rethink our own assumptions. In some past experiences of dialogue, there seemed to be a covert need for some kind of uniformity or of approaching all religious ways as equally valid or essentially the same. This resulted in a contrived effort for respect. It is the exploration of differences between religious worlds that allows one to criticize and renew one's awareness of one's own tradition. Indeed, similarities discovered can teach us much about what may be universal to authentic religious paths. However, avoiding differences or playing them down is a tragic and often practiced mistake. One could ask the question simply: If there's nothing much different about us, why dialogue at all? It is often the differences that make the very dialogue fruitful.

"The fifth criterion for good dialogue is more of a caveat: Make no hasty determinations about the other, and keep in check the need to overgeneralize or categorize the religious life of the other. We must realize that we know and can legitimately say less than we might want to about the other. Interreligious dialogue is holy ground with much mystery, and we should walk barefoot and humbly.

"Virtually everyone agrees that dialogue can become a great forum for internal growth and transformation. John Cobb writes, 'To hear another articulation of a truth is to be changed by that truth.' And no matter how one assesses whether or not that articulation should be appropriated, Cobb echoes· a universalized point of view. It changes one to be engaged with another, particularly if that other brings a whole new spiritual perspective and practice.

"Another goal is that it could raise a critique to one's own religious life. To remain enclosed in one's own tradition provides a danger of not seeing how it looks from the outside. Its assumptions are never called into question. How, for example, would Americans look at our foreign policy if we regularly spoke to Europeans, Asians, Africans, and Latin Americans about politics? Surely such discussions would make us reassess our own policies in a very different light. By suggesting the possibility of critique, I am not thinking of· a wholesale rejection of one's tradition. Instead, one might discover a distortion of one's own belief, or an overdeveloped part of the tradition might be balanced by an alternative voice.

"Third, dialogue can actually strengthen one's own spiritual tradition. It can lay bare one's assumptions, usually unconsciously held, and force one to a better, more clearly grounded conviction of what one holds true. One could, for example, see Christ differently and his relevance to one's life even more fully by encounter with another. We can reexperience Christian convictions in light of the contrast that they may have with the other. I was in a Buddhist-Christian dialogue some years ago, and one of the Buddhist representatives remarked at how every room in the monastery had a crucifix. He wanted to discuss this. I had been so used to them that they didn't even register. Sometimes we can domesticate our deepest symbols, and it takes an outside voice to highlight their prominence.

"A fourth goal for dialogue is that it can expand one's horizons of a awareness. We see things from a different point of view, and we can get an expanded sense of broader human transcendental experience. It may also be that there are insights from another's religious tradition that could actually complement deficiencies in one's own faith, even as they strengthen one's own religious tradition. Shortly before he died, Thomas Merton wrote that for some Christian monastics, learning a religious discipline from another tradition could not only assist a given monk, but also contribute to monastic renewal in the Western church." 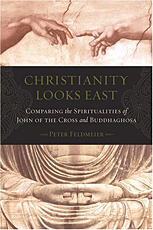