Upside-Down Zen Finding the Marvelous in the Ordinary

By Susan Murphy
Susan Murphy on finding beauty and life in all things including concrete canyons, parking lots, and freeways.

"In old-fashioned stores (sometimes still found in country towns), you used to see a sign in the window that reassured you: 'Feel free to look around. No obligation to buy.' This was in an era that still respected dreaming forms of awareness, and still respected people; in fact, an era that had not yet invented 'consumers.' Let us pay homage to that old vanishing courtesy by taking its invitation much further, out of the shop and into the street.

"Zen literature is replete with exquisite imagery extending deep recognition to the natural world — both because of the kind of barely urban world in which Taoism, Chan, and Zen arose, and because of the kinds of places in which monasteries, temples, and hermitages tend to be built. Mountains, rivers, rocks, trees, grasses, clouds, blossoms, and moon richly elaborate and differentiate our own most intimate self — more readily, maybe, than the world of streets, fire hydrants, and electricity substations.

"The flower in the grass may point the way with humble ease, but what about wall rubble and discarded plastic toys and a broken tile in the weeds? That too is where we live; it is a fragment of our regular world of human trouble and riches, and it waits to meet with us. I suggest we can when afford to love it, tend it with our open attention, redeem it with our full imagination. To fail to truly attend to it is to lay waste the place right where we are, where we live our lives. It is to agree to live with indifference.

"Is indifference so bad? Well, strange as it may first sound, it is a kind of terrorism, which from one angle of view may be thought of as the extreme expression of contemptuous indifference for the human world. A friend who is an eco-philosopher has suggested that the only truly dangerous places in our human world are the only truly unloved ones. The concrete canyon of a freeway, the dark, fluoro-lit intestines of a grease-stained parking lot, the urine-desecrated stairwell — is it possible to feel the propensity of things, to lean into contentment, even here?

"When we recognize a place, or an aspect of a place; when we bless it with our inner recognition; then we know it to be part of us, and something can begin to live there. A home is made, a haven, in the most unlikely place. Until then, we dump there everything we don't like about ourselves, and it will seep back into our dreams like toxic waste.

"Counter-terrorism, in this sense, is to actively take up the practice of loving the order of matter generally. This is not the act of shopping — of turning compulsively toward material goods as though suffering and loss may be magically eased by that hankering. It is more subtly the act of not turning away, of not breaking faith with the things of this world. It is feeling for the mysteries beneath appearances, without picking and choosing — in other words, the far side of shopping.

The grain of the world

"You can wander across an abandoned lot and begin to discover the suggestive fragments and relics of human life preserved in it, partly breaking the surface, moulded into ephemeral sculpture; or an improbable cluster of objects strange to one another but embedded together in an odd kinship and richly art-directed by time. You can become an aficionado of outback goldfield rubbish tips, where gadgets grown extraordinary and unintelligible by time have become welded and melded by rust into things both beautiful and so gone they can never be explained. When you feel free to look around, many of the beauties arise through a secret love of ruins, and fascination with the sea change of time; and others come with the sheen of nostalgia, but in its perverse mode, unsentimental.

"A flattened tin can, as blood-red in its rust as the red dust that the heart so loves out there among the olive-grey saltbushes, can be a treasure to take home with you — on its upturned base, an imprint of the map of Australia. When you handle it, the dust as fine as incense ash, a silt-layered memory of an ancient sea, lightly coats your fingers. The word nostalgia has, in its older, Latin roots, the sense of 'our old (sweet) shared pain': the ability to hold the bitter until it joins up with all sweetness.

"Each treasure starts with a sense of the world as distinct and penetrating, a little piece of the world's grit trapped in the soft, wet open eye. It is something like a pearl. The grit or grain of the world washes in to the tender open oyster of the embodied self and leaves its residue — a kind of suffering accepted. Then it can suffer a slow sea change, in the depths of psyche, memory, and imagination, and the abrasions of the world become gradually pearlescent, many layered, spun around the embedded injury to make it no longer alien but tolerable, included, and strangely beautiful over time. This receptiveness to the world is a powerful practice — accepting the pain of openness in a human body, and turning that way.

"A storehouse of treasures is opening of its own accord inside your self. Just letting it in is part of that opening; the rest is the willingness to play. That is the fantastic, uncalled-for, inspired movement back toward suffering, the forgotten or unloved or overlooked thing; that's the meeting.

"Such a sense of play is a true antidote to terrorism and its mortal fear of life, its aloofness from the complexity and duration of suffering, and its deadly disrespect for the comical and lovely human effort of making a world. I want to call our common comical, lovely, ugly human world 'the street,' the shared social space we build and desecrate together. And I want to ask, What happens if we agree to fully live in the glorious mixed feast of the street? What secret dimension of play, what unexpected homecoming, might that open up in us?" 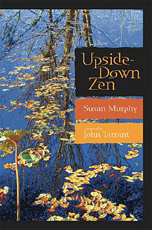