By Terrence J. Rynne
Terence Rynne on Jesus's model of restorative justice rather than retributive.

"It is a mystery to me that more Christians have not embraced the non-violent Jesus. It is a mystery to me that the Christian churches, in particular the Catholic Church, are not, at this point in history, clearly proclaiming, with a strong and united voice, the way of nonviolent discipleship. Given the clear witness of Gandhi and the astonishing achievements of organized nonviolent action in the sixty years since his death, the liberation of country after country, from Poland, East Germany, and the Ukraine to South Africa, the Philippines, and Czechoslovakia, and given the powerful witness of Gandhian adherents such as Martin Luther King, Lech Walesa, Vaclav Havel, and Nelson Mandela — why is it not more obvious to Christians that the Sermon on the Mount is the way forward? Given the united testimony of contemporary scripture scholarship, why do we still hang back from following the way of the nonviolent Jesus?

"I believe there are three major reasons: first, we are enmeshed in a culture that believes in the myth of redemptive violence; second, we are deeply imbued with a spirit of retributive justice and as a result find it hard to hear the biblical message of restorative justice; third, some of our fundamental Christian tenets, of our 'systematic theology,' were conceptualized with a mindset that accepted violence as a given for humans.

"The myth of redemptive violence in which our culture is enmeshed is the belief that, when one is really up against it, only might can bring deliverance. When push comes to shove, most people believe, the only logical thing is to push back. One has every right to defend one's self, one's property, one's family, one's nation. End of story. The way to maintain power is to carry a big stick and not be afraid to use it when you have to. Otherwise you just invite attack. This is undoubtedly the conventional wisdom and the way of the world. The only problem is — it is not the gospel.

"The political and ethical stance of many of us Christians is more often shaped by the concept of retributive justice than by the biblical teaching of restorative justice. 'To do justice' in the retributive justice scheme means to appropriately punish those who have done wrong to society. The symbol of this kind of justice is the ancient symbol of the female figure holding the scales. Justice is not done until the scales are once again in balance. Because of this ingrained value we in our culture are fascinated with the issues of determining guilt, tracking down criminals, and administering justice — understood as appropriate punishment. This carries into popular entertainment. Witness the high ratings for television shows such as CSI and Law and Order. We just can't get enough stories about finding and punishing the guilty. CSI and Law and Order multiply themselves into CSI Miami and CSI New York and Law and Order: Special Victims Unit and Law and Order: Criminal Intent.

"In cultures that emphasize a retributive understanding of justice, determining who is guilty and exacting appropriate punishment are important functions of society. Those who find and punish the guilty — the police, the private investigators, the evidence technicians, the prosecutors, the judges — are legitimately held up as important protectors of society's well-being. This retributive mindset spreads into everyday life. As Joel B. Green and Mark D. Baker note:

" 'The assignation of blame has reached the status of a vocation for some in the media, and the two-fold process of determining fault and meting out punishment occupies families, schools, businesses and more . .  Who started this fight? Who called the first name? Whose idea was this?'

"This is a far cry from the biblical teaching on restorative justice. Throughout the Bible, especially in Paul, justice is what God is doing for his people, justice is God delivering them from their sin. God pursues, woos, threatens, raises up prophets, works mighty deeds, reaches into people's hearts to save them from themselves. Justice is active. The point of the pursuit of justice is not punishment but change of heart and reconciliation between people and between people and their God. The biblical symbol of justice is the river, not the woman with the scales. The deep belief retribution, the assumption that justice means retribution, keeps people from hearing the clear teaching of Jesus on loving one's enemies. Forgiveness, for a retributive mindset, is not the act of a magna anima, a magnanimous person, but permissiveness or being 'soft on crime.' In the words of Christopher D. Marshall: 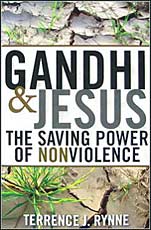