Too Soon Old, Too Late Smart Thirty True Things You Need to Know

"Incalculable harm is done to the relationship between the generations by the complaining (often accompanied by implications of neglect) that comprises the conversation of many of the elderly. I know lots of people who have come to dread phone calls from their parents and especially their answer to the question, 'How are you doing?' What could be less interesting and more discouraging than a litany of aches, pains, and bowel difficulties, delivered in the querulous tone of those who realize that what they are suffering from is beyond remedy and getting worse?

"I believe that parenthood, a voluntary commitment, does not incur a reciprocal obligation in the young — either to conform their lives to our parental preferences, or to listen endlessly to our protests about the ravages of time. In fact, I am of the opinion that the old have a duty to suffer the losses of age with as much grace and determination as they can muster and to avoid inflicting their discomforts on those who love them.

"It is a primary task of parents throughout their lives to convey to the young a sense of optimism. Whatever other obligations we have to our children, a conviction that we can achieve happiness amid the losses and uncertainties that life contains is the greatest gift that can pass from one generation to the next. Like all the values we wish to teach our children — honesty, commitment, empathy, respect, hard work — the supreme importance of hope is taught by example.

"Many old people report the feeling of invisibility experienced by other minorities. This takes the form of being ignored in stores by salespeople, seeing few desirable reflections of themselves in popular culture, becoming the object of obligatory visits and phone calls from family members, and above all, no longer being treated as if they have anything useful to say. It is this latter experience, not being listened to, that is the most galling for the elderly. The excruciatingly boring conversation that the old traditionally inflict upon the young is a kind of retaliation for the devaluation and sense of irrelevance that many old people feel.

" 'Getting old is not for sissies' is an accurate statement of the predicament faced by the old in a youth-obsessed society. Perhaps our final obligation is to sustain the physical and psychological blows that accompany our aging with a dignity that eschews self-pity.

"Is it possible to remain hopeful in the face of the insults to our selfhood that time inflicts? Just as courage is a virtue not equally distributed among the young, so we cannot expect it to be uniformly demonstrated by the old. We know and value it when we see it, however. It is our ability to contemplate our imminent mortality with equanimity that gives us the opportunity, finally, to be brave.

"If we can retain our good humor and interest in others even as the curtain closes, we will have contributed something of inestimable value to those who survive us. We will have thereby fulfilled our final obligation to them and expressed our gratitude for the gift of life that we, undeserving, have been given and that we have enjoyed for so long." 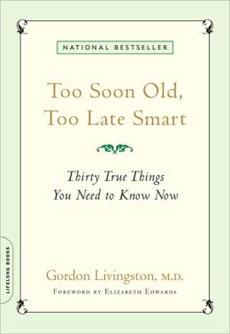