By James Carroll
The novelist and columnist James Carroll on how and why his Catholic identity has deepened over the years.

"By remaining a Catholic and advocating reunion of these two traditions (and ultimately of other Christian denominations), I am keeping faith with the widely held and profoundly Catholic conviction that the scandalous divisions of the Reformation must end. Over the years, as I have entered into serious interreligious dialogue and returned to formal study of theology and Church history, my Catholic identity has only deepened. It has matured.

"Obviously there is a place for a diversity of religious practice and belief within the Church, and some of the cultural traditions embedded in post-Reformation denominationalism can be maintained without insult — much as within the Roman Catholic Church there are various rites that preserve national and cultural differences. In any case, the Christian Church is one, and the time for its organization and theology to reflect that unity is now, even if it does not yet seem so in Rome. As this book shows, the dominant experience I have had of Roman Catholicism has been of its vitality. I revere Jesus and believe in him. But I am a Catholic, and not another kind of Christian, because Catholicism is a necessary realm of community responsibility and historical consciousness. If we are not committed to a particular decision-making commonwealth, how can we hope to hold the world together?

"My commonwealth is the Catholic Church. The culture of this particular tradition is too precious to be abandoned, and its coherence is too powerful to be underestimated. That only democratic procedures of the sort initiated by Vatican II (and aiming to dismantle everything from antisemitism and misogyny to pederasty) will allow this institution to continue its evolution, and that those procedures have so far been stifled by the narcissism of Church leadership, are not the whole story. My criticisms of the Church's hierarchy were generated in the first place, as we saw, by figures of that hierarchy. And my criticisms have been steadily tempered by gratitude for the hierarchy's prophetic teachings on social justice, with, for example, the American bishops' decisive turn away from war (1983) and their rejection of an unjust economy (1986). In the era of Vatican II, the Catholic laity came into their own as people of conscience, unafraid to think for themselves. I was one of those.

"As my writerly concerns returned to religion — an accidental development tied to religion's emergence as a public question in the past dozen or so years — I found myself making public the private conclusions I had reached as a believer. This was especially so with the book I published in 2001: Constantine's Sword: The Church and the Jews — A History. After September 11 of that year, the connection between religion and violence surfaced as a world-historic problem, and my work as a writer of books and newspaper columns became more centered on religious questions than ever.

"This is an ironic turn in my own life story. As a former priest, my religion is as much to the point as it was when I was a priest. Yet my understanding of Catholic faith, violating as it does the neoconservative dogma that holds sway in the Church, became controversial. In a Constantine's Sword symposium held by the theology faculty at Boston College, one priest dismissed my work as 'Protestant.' Aware as I always am of the life-shaping influence I have been fortunate enough to feel from Protestant writers like Dietrich Bonhoeffer and Reinhold Niebuhr, and from Protestant friends like William Sloane Coffin, Jr., and Krister Stendahl — not to mention from my Protestant wife — I was taken aback to hear the word used as an epithet. I replied that, in my view, the time had come for the Catholic Church to take up the Protestant challenge, learn from it, and do its part to end the conflict. It was no longer necessary to drive from the Catholic Church those who raised questions about belief and practice, any more than it was necessary for such questioners to banish themselves. The depth of relief I felt when, even as a Catholic out of step with the newly conservative hierarchy, I laid public claim to my place in the Church brought home to me how very much I love it." 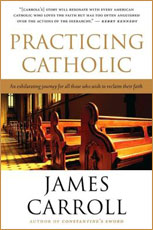