After You Believe Why Christian Character Matters

By N. T. Wright
N. T. Wright on why Christians are called to learn and practice the disciplines of a God-reflecting life.

"It is thus more or less impossible to speak of God with any conviction or effect if those who profess to follow Jesus are not exemplifying humility, charity, patience, and chastity. These are not optional extras for the especially keen, but the very clothes which the royal priesthood must 'put on' day by day. If the vocation of the royal priesthood is to reflect God to the world and the world back to God (the world, that is, as it was made to be and as, by God's grace, it will be one day), that vocation must be sustained, and can only be sustained, by serious attention to 'putting on' these virtues, not for the sake of a self-centered holiness or pride in one's own moral achievement, but for the sake of revealing to the world who its true God really is. The church has been divided between those who cultivate their own personal holiness but do nothing about working for justice in the world and those who are passionate for justice but regard personal holiness as an unnecessary distraction from that task. This division has been solidified by the church's unfortunate habit of adopting from our surrounding culture the unhelpful packages of 'left-wing' and 'right-wing' prejudices, the former speaking of 'justice' and meaning 'libertarianism' and the latter speaking of 'holiness' and meaning 'dualism.' All this must be firmly pushed to one side. What we need is integration.

"The high calling of Christian morality is therefore the necessary handmaid of the still higher callings of Christian worship and mission. The virtues which constitute the former are the vital components of the latter. The only way for worship and mission to become second nature to the followers of Jesus is for the virtues, the Spirit's fruit, the passion for unity, and the celebration of the multiply varied vocations within the one body all to become second nature as well. Otherwise, worship will be a sham and mission a mere projection of ideologies. Reflecting God's image means learning the disciplines of a God-reflecting human life." 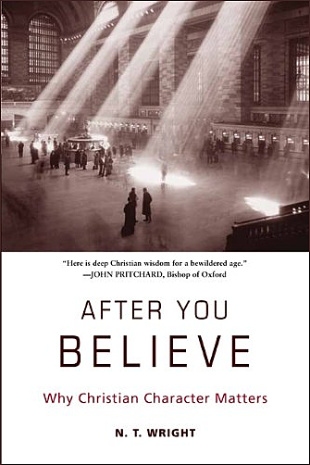