"Many people of the world live in real, material poverty and social insignificance; their situation is not simply a matter of economics. Poverty is a complex reality with many different players; in the frame of theological reflection in Latin America and the Caribbean we talk about the social insignificance and marginalization and unrecognized basic human rights as well. A person can be insignificant because of economics, race, gender, culture, ethnicity, or other reasons.

"Poverty is also a condition that has numerous human causes: social structures and mental categories. Solidarity with the poor is not limited to direct assistance to the poor; it must also manifest a commitment to eliminate the root causes of poverty. This perspective was slow to make its way into the social magisterium of the Catholic Church, but it has been evident in the past few decades.

"The ultimate instance of real poverty and disrespect of the human dignity of every person made in the image of God is early death; it is prevalent and unjust, and it represents a serious challenge. Archbishop Oscar Romero denounced this situation, which Medellin and Puebla called 'inhumane' and 'against the Gospel,' and for this he was accused of advocating social conflict. This solidarity with the poor requires a denunciation of the condition in which they live, as well as its causes.

"Spiritual poverty and a commitment to alleviating real poverty are profoundly related and cannot be separated. Out of spiritual poverty — a condition of the disciples who dedicate their lives to service of the kingdom and a search for God's will — is the attitude of detachment, or freedom from the material goods of the world, for the true disciples realize that where one's treasure resides is also where the heart abides (Matt. 6:21). Spiritual poverty calls us 'to be poor,' Romero said, 'and become involved in the poverty of our people as if they were our own family.'

"Voluntary poverty is a way of life. Spiritual poverty and voluntary poverty are united in the expression 'preferential option for the poor.' The word 'preferential' has, as one of its primary sources, the phrase of John XXIII: 'the church for everyone and in particular the poor.' 'Preferential' reminds us that God loves all people, but his first love is the forgotten and oppressed, the poor. Universality and preference are both present in the Christian message. The phrase 'preferential' is new, but its content is very old and requires simply opening the Bible to find it. Karl Barth, a good Gospel reader, said: 'God always favors the poor and [is] against the rich.'

"If it is preferential, it is not, by definition, exclusive. Preference and universality are in tension, not in contradiction, as prayer and action are not contradictory, but are in tension. The preferential option says that 'the poor are first.' 'Priority' or 'privileged' could be substituted for 'preferential.' They are similar expressions. Most important is not to lose sight of either the universality of God's love nor that the weakest and insignificant come first. To live these two poverties implies a conversion. Each Christian, and the whole church, must convert.

"A church for the poor is a church that makes its own the practice of Jesus, that makes memory of him in the Eucharist and service, that communicates through the languages of gratuity and justice, prophecy and mysticism, and that lives spiritual poverty and a commitment to the poor, two basic conditions so that the testimony we give of the coming of the kingdom is authentic."
— "Close to God, Close to the Poor,"
Paginas 220 (December 2010): 12-14 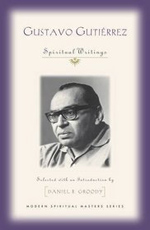