By Laurance Wieder, Robert Atwan
A poem by Carl Sandburg on two Christs at Golgotha.

Two Christs were at Golgotha.
One took the vinegar, another looked on.
One was on the cross, another in the mob.
One had the nails in his hands, another the stiff fingers holding a hammer driving nails.
There were many more Christs at Golgotha, many more thief pals, many many more in the mob howling the Judean equivalent of "Kill Him! Kill Him!"
The Christ they killed, the Christ they didn't kill, those were the two at Golgotha.

The leaves of a mountain tree,
Leaves with a spinning star shook in them,
Rocks with a song of water, water, over them,
Hawks with an eye for death any time, any time,
The smell and the sway of these were on his sleeves, were in his nostrils, his words.

The slum man they killed, the mountain man lives on. 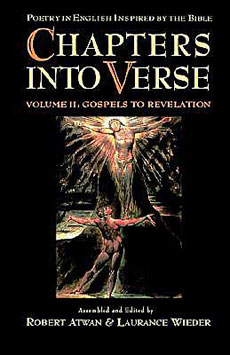