Calming the Fearful Mind A Zen Response to Terrorism

So many words have spilled out through the media about the roots of terrorism and the best ways to handle this scourge that endangers all nations. Zen master and meditation teacher Thich Nhat Hanh offers a spiritual perspective that is both compassionate and illuminating. He was the one who in a statement issued to the New York Times on September 18, 2001, said: "The violence and hatred we presently face has been created by misunderstanding, injustice, discrimination, and despair. We are all co-responsible for the making of violence and despair in the world by our way of living, of consuming and of handling the problems of the world. Understanding why this violence has been created, we will then know what to do and what not to do in order to decrease the level of violence in ourselves and in the world, to create and foster understanding, reconciliation, and forgiveness."

When asked what he would do if given a face to face interview with Osama bin Laden, he said: "The first thing I would do is listen." This is the same kind of spiritual perspective demonstrated by Archbishop Desmond Tutu in South Africa's Truth and Reconciliation Commission hearings which were designed to heal the wounds of apartheid. Forgiveness, compassion and an open heart are the best responses to terrorism — not hatred, anger, vengeance and violence.

In this inspiring collection of essays, dharma talks, and speeches, Thich Nhat Hanh addresses the fear and misunderstanding that have been constants in the post-9/11 world. In one talk, he suggests that the people of the United States create a Council of Sages who would listen deeply to citizens that feel they are victims of discrimination, exploitation and social injustice. Healing the wounds of millions of individuals presently suffering is one way to combat our separation from others.

In a speech to filmmakers in Hollywood, Thich Nhat Hanh challenged them "to make films that water the seeds of collective awakening and mindfulness." Of course, so many of the most popular movies do just the opposite: they water the seeds of violence and hatred of others. This Buddhist monk spent some time with members of the U.S. Congress on a retreat where he spoke about leading with courage and compassion.

Throughout his writings, Thich Nhat Hanh presents meditation as a source of personal renewal: "Only by calming our minds and looking deeply within ourselves will we develop the insight to identify the roots of terrorism. With compassion and communication, terrorism can be uprooted and transformed into love." What will enable this to happen? Thich Nhat Hanh points to community building as the most important action of this century. Working together and practicing together, we can create an alternative to terrorism. 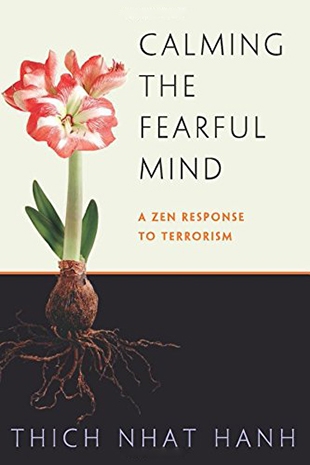