People don't come to church for preachment, of course, but to daydream about God.
—Kurt Vonnegut

Those who would like to get to know Kurt Vonnegut a little better should rush out and buy this book. It lets us see him up-close and personal through his essays, reviews, speeches, forwards, commencement addresses, introductions, and articles. "Most of my adult life," the author explains, "has been spent in bringing to some kind of order sheets of paper eight and a half inches wide and eleven inches long."

Vonnegut is miffed at people who want to ban books — especially those who have judged his writing and think he is trying "to poison the minds of the young." Poppycock, says the author — he's raised six children, three of his own and three adopted ones. The Vonnegut family tree shows he is a true-blue Hoosier (with a twinkle in his eye).

In an essay prepared for the International Paper Company, he counsels youthful writers: "When you yourself put words on paper, remember that the most damning revelation you can make about yourself is that you do not know what is interesting and what is not."

Vonnegut has kind things to say about James T. Farrell, Joseph Heller's Something Happened (Heller is the first American writer to deal with "unrelieved misery at novel length"), Irwin Shaw and Celine (he "gave us in his novels the finest history we have of the total collapse of western civilization in two world wars").

Vonnegut is enchanted by the Sermon on the Mount: "Be merciful, it seems to me, is the only good idea we have received so far." Everyone is looking for mercy, especially in "massage parlors, bus stations, bars."

In another essay, Vonnegut describes his divorce from his wife of 20 years: "We woke up in ambulances headed for different hospitals, so to speak, and would never get together again. We are alive, yes, but the marriage was dead." So it goes, Kurt would say.

The author doesn't look away from the dark side of life: many things do hurt and the quality of mercy he respects is in short supply. Nonetheless, Vonnegut's eccentric clowning is a moral stance well worth commending. 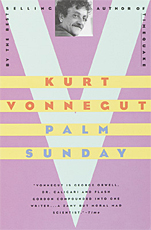