The Zahir A Novel of Obsession

By Paulo Coelho
Novel about a successful novelist obsessed with finding his wife, who has disappeared from his life leaving him bereft of meaning.

Brazilian-born writer Paolo Coelho is the author of The Alchemist and many other quest novels. He has sold an estimated 65 million books in 150 countries in 60 languages.

The unnamed narrator of this story is a wildly successful novelist and celebrity who lives in Paris with his wife Esther, a war correspondent who speaks four languages. Their marriage has hit a dry spot and she is restless, wanting to move on in search of her own happiness. When Esther disappears, he is tormented and traumatized by the mystery of what has happened to her. Has she been kidnapped, killed, or has she left him for another lover?

The narrator has had has plenty of success in his life: well attended book signings, power lunches with film industry people, and interviews with journalists. But it all leaves him with a sour taste in his mouth. He remembers a story by Jorge Luis Borges about a mystical coin: "A year later, I wake thinking about the story by Borges, about something which, once touched or seen, can never be forgotten, and which gradually so fills our thoughts that we are driven to madness. My Zahir is not a romantic metaphor — a blind man, a compass, a tiger, or a coin. It has a name, and her name is Esther."

The narrator's struggle is that of a man as trying to come to terms with something he cannot understand or control: the mystery of Esther's absence. It is very hard for him to let go of his feeling that she is the only one who fills his life with meaning. The inner journey he takes opens him up to new possibilities.

Then Mikhail, the last person Esther was seen with, contacts the narrator and promises to take him to her. Mikhail, a young man who works with unhappily married couples, has his own spiritual perspective on love.

Coelho has not created a masterwork on the level of The Alchemist, but for those who are willing to travel lightly, there are some interesting insights here on obsessive love, the emptiness of celebrity-status success, and the courage needed to square off against the mysteries and rewards of letting go of ego and stepping into the dark unknown. 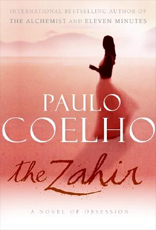