Chief Joseph & the Flight of the Nez Perce

By Kent Nerburn
An incisive portrait of a peaceful Native American leader and a scary look back at the ugly side of our history of violence and deceit.

You have probably heard of Lewis and Clark and their journeys into a majestic land known as the Columbia Plateau and its misted valleys, high mountain meadows, and gigantic gorges. But how much do you know about the Nez Perce tribe that considered this awesome place their home? They made the strongest bows of any native people, they could create a cradle board with 100,000 beads in it, and their young men would boldly swim across the ice-laden Salmon River every day to keep their bodies strong.

Chief Joseph was the quiet, resolute, and peaceful leader of the Nez Perce who took 800 men, women, and children on a 1,500 mile retreat after they were illegally forced from their homeland in Oregon by a U.S. government that was hungry for land and unwilling to hold true to its treaty obligations. Buffalo Bill Cody called him "the greatest Indian America ever produced," and photographer Edward Curtis saluted him as "one of the greatest men who ever lived."

Who was this man and what can we learn about the history and the soul of America from him? Kent Nerburn asked himself this question during the four years that it took him to put together this poignant account of Chief Joseph and the Nez Perce exodus. The author traveled over 20,000 miles to talk with Nez Perce elders and descendents of this extraordinary leader.

With measured words and narrative power, Nerburn presents a dramatic portrait of Chief Joseph as a man of peace whose true greatness has been "obscured by myth and shrouded by legend." Here is a sympathetic account of a leader who "allowed himself to be elevated to a cultural icon after the surrender in order to keep the nation's attention focused on the tragic plight of his beleaguered people."

Chief Joseph and the Nez Perce were victims of many stereotypes. To some, they were just troublemakers who could not accept the progress of a growing and changing nation. To others, all Indians were just primitive people who could be saved only through conversion to Christianity. To Easterners who had read James Fenimore Cooper and Henry Wadsworth Longfellow, Indians were mythologized as noble children of the plains and forests. To many settlers out West, the Nez Perce were dangerous and untrustworthy savages likely to kill and steal without any reason.

The U.S. military lied to Chief Joseph again and again until his heart and mind were drained of hope that he would ever see his beloved homeland before he died. More than anything else, Nerburn conveys the compassionate leadership of Chief Joseph on his long and arduous journey. Sadly enough, this moral quality was nowhere to be found in the actions or attitudes of the whites who dealt with him.

This scary history lesson reveals the shadow side of America, which unfortunately still animates a war-prone nation to treat others with no respect and to take whatever we want from other nations. 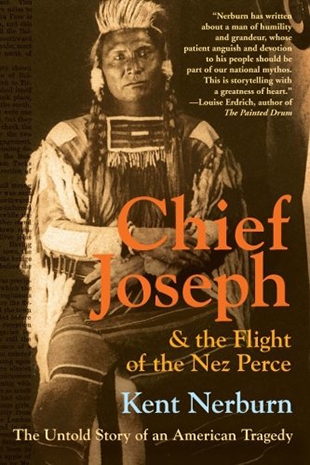