Path Without Destination The Long Walk of a Gentle Hero

"Being on the road is hard on the body but it is a state in which the soul can take wings and the spirit can be free," writes Satish Kumar in this astonishing account of his spiritual journey. Born in 1936 in a village in India, he became a Jain monk at the age of nine, taking the vows of celibacy and poverty. After eight years, Kumar left to join an ashram created by Vinoba Bhave who had worked closely with Gandhi in the Independence Movement. Here through a campaign for land reform he learned about the deep connection between spirituality and nonviolent social change.

In 1962 Kumar and a companion set off from Delhi on a peace march to Moscow, Paris, London, and Washington, the capitals of the nuclear powers. They remained strictly vegetarian and took no money — relying on the hospitality of strangers. During the 8,000-mile journey, Kumar spoke about world peace and was buoyed by the many people in different countries who shared his dream. A woman in Armenia gave him four packets of tea to give to the world's leaders. She said they should brew a pot of tea before making any decision to launch nuclear missiles.

Kumar eventually settled in a small village in England where he and his wife took over Resurgence magazine, a linchpin in the "green" movement. And in 1991, he founded Schumacher College, named after the economist who brought together spirituality, simplicity, economics, and ecology under the "small is beautiful" movement. He has continued his pilgrimages with walking trips through England, Wales, Scotland, Japan, and Tibet.

In the last pages of this inspiring book, the author delineates the spiritual firepower in Gandhi's eleven principles for a better society. This is a truly visionary work. Satish Kumar is the perfect traveling companion for those walking into the new millennium with the legs of spirituality and a path paved with an economics of scale, service, and compassion. 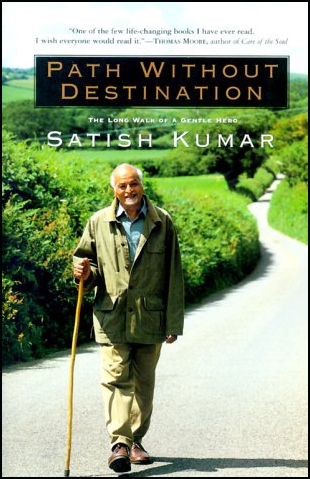