By Brian D. McLaren
The right book at the right time with its call to a new form of Christianity that can appeal to evangelicals, mainliners, and spiritual seekers.

Brian McLaren, a nondenominational pastor at the Cedar Ridge Community Church in the Baltimore-Washington D.C. area, was named one of the 25 most influential evangelicals in America by Time magazine in a February 7, 2005 article. He is the leader of a movement called "the emerging church," a broad and inclusive network of churches, Christian leaders, thinkers, and bloggers who want to reinterpret the Gospel for the postmodern era. They are busy looking for fresh ways to worship, interpret theology, engage the popular culture, move beyond denominational and political labels, and live the Gospel.

This imaginative and convincing book outlines a path that will appeal to people both inside and outside the church, those who have become disenchanted with dogmatic Christianity yet are not at all enchanted by a materialistic and secular approach to life. McLaren finds himself sympathetic to those who are spiritual but not religious and those who have found Dan Brown's book The Da Vinci Code fascinating and read the Gnostic Gospels with great interest. He states:

"Think about the people who have profound spiritual experiences that tell them there's something more to life, something that can't be reduced to the formulas or mechanisms of organized religion or reductionist science. Think about the people who — even though they've given up on 'organized religion' due to bad or boring experiences with it — still have a high opinion of Jesus. Or maybe 'opinion' isn't the right word: what they have is a certain sense of possibility regarding Jesus, a sense that there might be more going on with him than most people realize, including perhaps many who call themselves Christians. These unsatisfied people — and I'm one of them — have this unshakable intuition that both he and his message are better than anything they've heard or understood or figured out so far."

McLaren believes that Jesus didn’t come to start a new religion but was on a radical journey to start a revolution in the way people lived their everyday lives on every level — political, social, artistic, economic, intellectual, and spiritual. His secret message was the kingdom of God, and it was so radical that it knocked over many of the conventional assumptions, priorities, values, and practices of those who heard it.

The spiritual revolution of Jesus is outlined in the Sermon on the Mount, an approach that is as difficult to promote today as it was centuries ago:

"Human kingdoms advance by force and violence with falling bombs and flying bullets, but God's kingdom advances by stories, fictions, tales that are easily ignored and easily misunderstood. Perhaps that's the only way it can be."

But one thing cannot be ignored: the calling of Christians to be peacemakers and to love their enemies. Conventional morality calls for revenge and retaliation whereas the followers of Jesus are to be reconcilers. In one bold paragraph, McLaren shows how radical the kingdom practices are:

"The kingdom of God, then, is a revolutionary, counter-cultural movement — proclaiming a ceaseless rebellion against the tyrannical trinity of money, sex, and power. Its citizens resist the occupation of this invisible Caesar through three categories of spiritual practice. First, they practice a liberating generosity toward the poor to dethrone greed and topple the regime of money. Second, they practice a kind of prayer that is a defiant act of resistance against the prideful pursuit of power, pursuing forgiveness and reconciliation, not retaliation and revenge. Finally, they practice fasting to revolt against the dominating impulses of physical gratification — so that the sex drive and other physical appetites will not become our slave drivers. And all of these are practiced covertly, in secret, so they aren't corrupted into an external show 'as the hypocrites do.' "

Now if Christians regularly lived these three practices each and every day, what a difference it would make in the communities where we live and work. McLaren also challenges people to experiment with other Christian practices such as silence and solitude, mindfulness, gratitude, and hospitality (all included in one way or another in the Alphabet of Spiritual Literacy). This book makes a creative space for evangelicals, mainline Protestant and Catholics, and spiritual seekers of all stripes to rally around a brand of Christianity that eschews judgmentalism, exclusivism, and an emphasis on heaven rather than on dealing lovingly with the messes and miseries of humankind.

McLaren is on the board of Sojourners and has demonstrated with Jim Wallis in Washington against budget cuts in programs for the poor. He believes in actively working for justice and exposing systemic forms of inequality and dehumanization. The Secret Message of Jesus is the right book for the right time with its call to a new form of Christianity that can appeal to evangelicals, mainliners, and spiritual seekers. It is a healing vision that can bring diverse groups together for a mission that is truly in sync with the kingdom announced by the carpenter's son from Galilee. 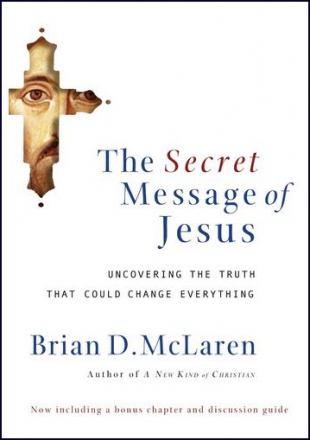