Cultivating a Compassionate Heart The Yoga Method of Chenrezig

By Thubten Chodron
Helpful meditations, visualizations, and mantras for Buddhists who want to cultivate a compassionate heart in everyday life.

Thubten Chodron is an American-born Tibetan Buddhist nun and the author of many books including How to Free Your Mind: Tara the Liberator. Chenrezig is the Buddha of Compassion, also known as Kuan Yin in China, Kannon in Japan, and Avalokiteshvara in the Sanskrit language. This deity has eleven faces and a thousand arms. In the foreword to this paperback, the Dalai Lama says he does the meditation practice of Chenrezig every day so that compassion can direct his life. Thubten Chodron presents the yoga method of Chenrezig, which consists of transforming the mind into compassion by means of reflective meditation, visualization, and mantra.

The challenge for all of us is to diminish the selfish, grasping ego that always puts itself before others. This is not easy in a world where anger, hatred, and revenge are so prevalent in our emotions and consciousness. The defensive ego that needs to be right and triumphant is constantly on the lookout for enemies. But one of the most remarkable teachings of Tibetan Buddhism is that we can learn from those who irritate us and press out buttons; the way to do this is to train our minds by reframing:

Later, Chodron observes that if we are at a social gathering and there are 30 people there, we might have a problem with one or two individuals but the rest are okay with us. In other words, the number of people in the world whom we can't stand is very small. So when we do come across someone who presses all our buttons and draws out our worst qualities, we ought to rejoice in their presence. They give us opportunities to practice compassion and equanimity, or as Chodron puts it, ""Fantastic, I get to practice patience now."

One of the things we love about Thubten Chodron is the way she shares her personal experiences. We can identify with many of them, including this one:

"During a retreat I did a few years ago, the cook served rice six times a week. I can't digest rice very well but I would think, 'Never mind, so many sentient beings worked hard to make this food. I see it as blissful wisdom nectar.' Then, I would eat a little and make offerings to the birds with the leftovers. I got to know the birds, which coincidentally were the same color as the deity I was meditating on. I saw the birds as the deity and imagined these deities flying in from everywhere, landing on the railing of my porch. I put out the rice transformed into blissful nectar and then made offerings to them. That helped me to transform the complaining mind that said, 'Oh no, not rice again!' "

Cultivating a compassionate heart is one of the privileges we have during this lifetime. Chodron explores sadhana practice in all its richness and variety, opening new doors and letting in fresh air with her meditations and visualization exercises.

read a practice on compassion 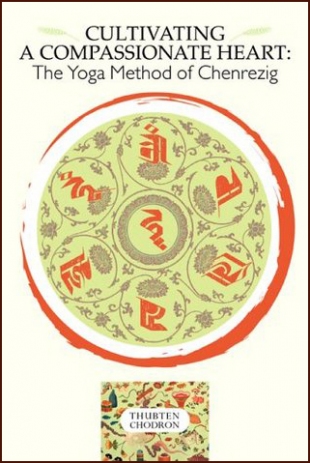