Kabir and Camille Helminski as the cofounders of the Threshold Society, a nonprofit organization dedicated to sharing the knowledge and practice of Sufism, have spent many years translating the works of this Jelaluddin Rumi (1207 - 1273), the great Persian poet and Sufi master. Kabir is a sheikh in the Mevlevi tradition that traces its inspiration to Rumi.

Many consider this to be the masterwork of Rumi, who today is read by millions around the world. He spoke to the Sufis of his time, who Helminski describes as very disciplined spiritual men and women:

"In Rumi's world, the Islamic way of life had established a high level of human awareness among the general population. The average person would be someone who performed regular ablutions and prayed five times a day, fasted from food and drink during daylight hours for at least one month a year, and closely followed a code which emphasized the continual remembrance of God, intention, integrity, generosity, and respect for all life. Although the Mathnawi can appeal to us on many levels, it assumes a rather high level of spiritual awareness as a starting point, and extends to the very highest levels of spiritual understanding."

Today we can savor Rumi's insights and epiphanies no matter what our religious perspective. He speaks across the ages to people of many faiths. All of the material in this paperback are from the first two books of Mathnawi, the whole of which comprises six books, and 25,632 couplets.

Here is a sampler of this material translated by Camille and Kabir Helminski:

• "My friend, the sufi is the son of the present moment:
to say 'tomorrow' is not our way."

• "Plant the love of the holy ones within your spirit;
don't give your heart to anything
but the love of those whose hearts are glad.
Don't go to the neighborhood of despair:
there is hope.
Don't go in the direction of darkness:
suns exist."

• "Since in order to speak, one must first listen,
learn to speak by listening."

• "Just as the heart becomes carefree
in a place of green, growing plants,
goodwill and kindness are born
when our souls enter happiness."

•"God turns you from one feeling to another
and teaches by means of opposites,
so that you will have two wings to fly,
not one."

Take time to savor this spiritual advice from Rumi. He has much to teach us about remembrance of Allah, daily practices of good behavior, virtues that we have long forgotten, being present, reverence for life, and much more. Reading this daybook will definitely bring light into your days. 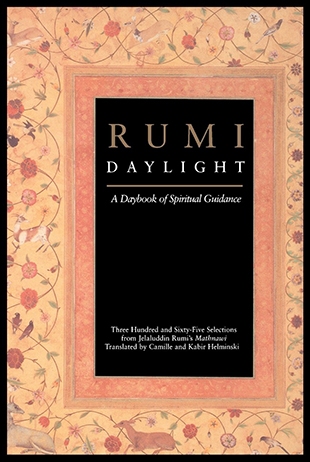