By Hyon Gak Sunim, Seung Sahn
The heart of Zen explicated in responses to letters.

The Korean Zen Master Seung Sahn is head of the Kwan Um School of Zen, which has 28 centers in the United States and Canada and 39 elsewhere throughout the world. In this down-to-earth and pastoral response to letters he has received, he presents the heart of Zen. There are chapters on suffering, work, relationships, monastic practice, and forms of Zen practice.

Seung Sahn is a great advocate of the "just-now mind." Attention and being present are the name of the game. He is also a great believer in hard training, which he calls "dry-cleaning the mind." Seung Sahn reveals that practicing and being with other Zen students is "the number one way to help your center become strong." It also enables us to combat the "I-my-me" way of life.

Letting go of attachment is an essential practice. Master Seung Sahn concludes: "Zen means not holding onto anything. If you are holding something, or making something, or attached to something, you are not practicing Zen. . . . So it is very important to put down your ideas and your feelings. What are you? If you don't know, only go straight — don't know."

Try a Spiritual Practice on Connections 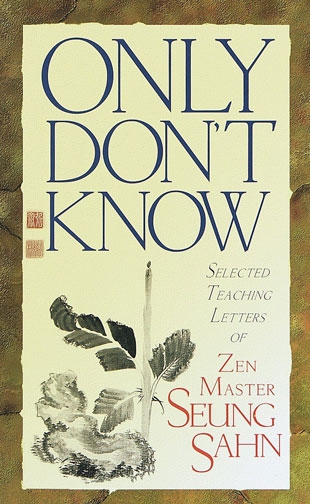