The Spirit of Silence Making Space for Creativity

By John Lane
Makes a good case for silence and solitude as launch pads for love, creativity and personal renewal.

The world is noisier than ever. Many see this as a good thing signaling progress, energy, and excitement. Seekers of stillness see it as a serious form of pollution that is annoying and unhealthy. It drains their joy and destroys feelings of peace and harmony. In the scrimmage between the noisemakers and the silence-seekers, the former seem to be carrying the day.

It doesn't have to be that way, says painter, educator, and author John Lane, who was instrumental in the creation of Schumacher College in Devon, England. He sees silence and solitude as necessities in this modern age:

"They preserve us from exhaustion, from fanaticism, from restlessness — from excess. They remain the fertile ground of creation, the source of contemplation, the place of mindfulness and, between two lovers so at ease with one another that they don't need to fill the space around them with conversation, of intimate communion. It is only in solitude and silence that our life is really present, that we are truly responsive to the heartbeat of the universe and free to contemplate the miracle of existence."

Lane notes the importance of silence in all the world's religions where it is known as a way to tap into the soul and begin the process of personal renewal. He salutes hermits and other lovers of solitude who have demonstrated the value of quietude, including Christian mystic Hildegard of Bingen, Japanese Buddhist monk and poet Taigu Ryokan, American poet Emily Dickinson, American writer Henry David Thoreau, French painter Paul Cezanne, and Catholic monk Thomas Merton. Their impulse to seek peace and quiet is counterpoised to the contemporary enemies of silence — speed, consumerism, and the idea that work is something we should escape if at all possible.

To offset the effects of these trends, Lane explains perspectives and practices that can help us re-enchant our world and create contentment, creativity, and refreshment. These include exploring the art of the commonplace, the healing power of nature, living in the moment, reverence, simplicity, and slow living. He concludes with a vivid anecdote about the needed response to the present day:

"There is a small piece of cinematic footage of Tolstoy taken near the end of his life by an intrepid film-maker. Tolstoy wouldn't let him in the house, but bounced up and down on his doorstep crying: 'Just live right!' " 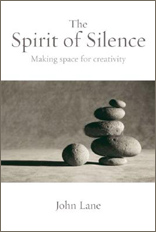