Vivekananda, World Teacher His Teachings on the Spiritual Unity of Humankind

By Swami Adiswarananda
An inspiring collection of lectures by Swami Vivekananda on spiritual democracy, spiritual humanism, and world unity.

In a speech to the final session of the World's Parliament of Religions in 1893, Vivekananda, a young Hindu monk said:

"The Christian is not to become a Hindu or a Buddhist, nor is a Buddhist or a Hindu to become a Christian. But each must assimilate the spirit of the others and yet preserve his individuality and grow according to his own law of growth. If the Parliament has shown anything to the world, it is this: It has proved to the world that holiness, purity, and charity are not exclusive possessions of any church in the world, and that every system has produced men and women of the most exalted character. In the face of this evidence, if anybody dreams of the exclusive survival of his own religion and the destruction of the others, I pity him from the bottom of my heart."

In this volume, which will appeal to spiritual seekers, Swami Adiswarananda, a senior monk of the Ramakrishna Order of India and the Minister and Spiritual Leader of the Ramakrishna-Vivekananda Center of New York, presents a group of lectures by this Hindu spiritual teacher and reminiscences from some of the disciples. In the introduction, he salutes this swami's love for humanity and his message of hope for the future. He identifies Vivekananda's contributions to world religions as his ideas about spiritual democracy, spiritual humanism, and an enduring bond of world unity. 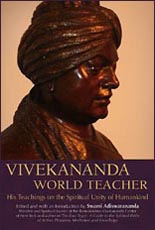