Take This Bread A Radical Conversion

By Sara Miles
An unusual and compelling spiritual memoir of a zealous woman who decided to play her part in feeding the hungry and the homeless in St. Gregory of Nyssa Episcopal Church in San Francisco.

"One early, cloudy morning when I was forty-six, I walked into a church, ate a piece of bread, took a sip of wine. A routine Sunday activity for tens of millions of Americans — except until that moment I'd led a thoroughly secular life, at best indifferent to religion, more often appalled by its fundamentalist crusades. This was my first communion. It changed everything." So writes Sara Miles in the opening paragraph of her spiritual memoir. This unusual book by an atheist who turned Christian offers a colorful and oftentimes compelling account of radical faith in the city of San Francisco where one can dine in some fancy restaurants or rub shoulders with street people who are hungry every day. Miles converts thanks to the liturgy and emphasis on the Eucharist at St. Gregory of Nyssa Episcopal Church. She is attracted to Jesus, who eats with everyone and refuses to turn anyone away from God's abundance.

The author grew up in family where religion was shunned. She traveled the world as a left-wing journalist and, as a lover of food, she also was restaurant cook in various places. By the time Miles reaches the turning point in her life, she is ready, willing, and able to find a new way to feed others, to incarnate the radical love of Jesus for the poor and the dispossessed. She starts St. Gregory's Food Pantry and is soon feeding thousands of people a week. Miles puts her body, mind, and soul into this service and then receives a huge financial gift. She starts many more pantries with it.

"Supper with God" is what animates her life. She writes:

"The entire contradictory package of Christianity was present in the Eucharist. A sign of unconditional acceptance and forgiveness, it was doled out and rationed to insiders; a sign of unity, it divided people; a sign of the most common and ordinary human reality, it was rarified and theorized nearly to death. And yet that meal remained, through all the centuries, more powerful than any attempts to manage it. It reconciled, if only for a minute, all of God's creation, revealing that, without exception, we were members of one body, God's body, in endless diversity. The feast showed us how to re-member what has been dis-membered by human attempts to separate and divide, judge and cast out, select or punish. At that Table, sharing food, we were brought into the ongoing work of making creation whole."

The holy work of making creation whole is no picnic, and Miles shares one story after another about selfish Christians, city bureaucrats, the concept of "faith-based charity," the sadness of seeing so many hungry children, and the challenges faced by homeless people in San Francisco. The journey of faith recounted on these pages is inspirational, a sign of what a zealous woman and a church community driven to service can accomplish in the name of the One who called us to feed others. 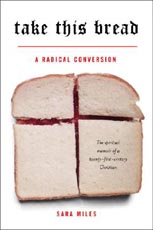