Teresa of Avila - The Book of My Life

"Teresa of Avila had that mysterious quality the Spanish call duende, which is characteristic of gypsies, flamenco guitarists, and dancers. Duende is raw, primitive, tempestuous energy, a vulnerability to inspiration burning in the blood. Fiery, wild, and utterly original, duende cannot tolerate neat, tidy categories, cramped forms; or human limitations of any kind. Duende makes us ready to be devoured in the heroic struggle for individuation and genuine freedom," writes Tessa Bielecki in her rousing introduction to Mirabai Starr's translation of Teresa of Avila's The Book of My Life. Teresa of Avila (1515 - 1582) was a mystic, a poet, an administrator, a religious reformer, the foundress of 17 convents, the author of four books, and a deeply devotional Christian. This sixteenth century Carmelite was only recently recognized as the first woman Doctor of the Church.

Mirabai Starr, who has already translated this Catholic saint's Interior Castle, describes this volume as "the memoir of a life in the middle of unfolding. It is the story of a mystic's coming of age." Both The Book of My Life and Interior Castle were suggested by Teresa's religious directors and were meant to placate zealous members of the Inquisition who were especially suspicious of those who experienced raptures, visions, and voices. This memoir is divided into three sections. The first covers her childhood and youth as an energetic girl and seeker of God. The second section deals with her teachings on the four waters of prayer and demonstrates her abilities as a devotional sage. The third section gives examples of her many mystical visions and raptures as well as material on the interior life and her founding of St. Joseph's, the first reform monastery.

Although translator Starr calls herself a Jewish practitioner of Buddhist meditation, a devotee of a Hindu guru, and a trained philosopher who has trouble believing in a personified deity; she has great respect for Teresa of Avila's spirituality, her interior journeys, her passion for God, her courage and creativity in the face of great physical suffering, and her leadership abilities in times when women were kept in their place. She believes that this memoir transcends religious dogma and attains a universal status that makes it understandable and meaningful to seekers from any tradition.

Here are two examples of Teresa of Avila's thoughts:

• The Gift of Tears
"When we engage in spiritual practice with love, our souls are uplifted, and our hearts softened, which may stimulate a gentle upwelling of tears. Sometimes our tears seem forced; other times it seems like the Beloved is drawing them out of us and we cannot resist him. His Majesty appears to reward us for our small efforts by blessing us with the sweet relief of weeping for love of so great a Lord. This does not surprise me; the soul has ample reason to find comfort in a love that surpasses all understanding. Here a soul finds solace; here she finds joy."

• Strive for Great Things
"I am amazed by how much can be accomplished on this path by being bold and striving for great things. Even if a soul is not quite strong enough yet, she can still lift off and take flight. She can soar to great heights. But like a fledgling bird, she may tire herself out and need to perch for a while."

Teresa of Avila's The Book of My Life is also available in an abridged version read by Tessa Bielecki (4CDs, $34.95) from Shambhala Audio. 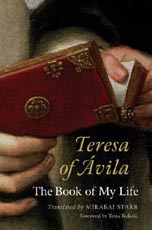